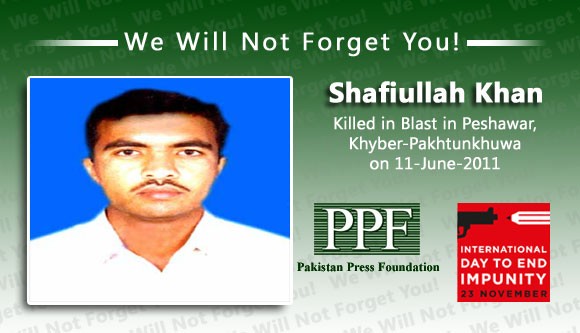 Shafiullah Khan, 28, a trainee reporter at the daily “The News”, Peshawar, succumbed to critical wounds he received during two deadly blasts that ripped through the military cantonment’s Khyber Supermarket in a commercial and residential area of Peshawar, the capital city of Khyber Pakhtunkhwa province, in Pakistan on 11 June.

Khan is the second journalist to have died as a result of the bomb blasts. Journalist Asfandyar Abid Naveed had died on the spot. Seven other journalists sustained minor injuries in the twin blasts.

With the demise of another journalist, the overall casualties have risen to 42. Police investigators believe the first low intensity bomb was planted as a trap to target mostly the police and journalists who were expected to come to the site of the explosion.

Khan had recently completed an MA in Journalism from Gomal University in Dera Ismail Khan and had joined the paper a week before the deadly attack. Khan joined other journalists in rushing to the scene of the first low-intensity blast in the toilet of a restaurant, just a few metres from the newspaper’s office, and fell victim to the subsequent suicide attack, when a man on a motorbike detonated his “suicide vest”, causing a high number of casualties.

He had received third degree burns and was transferred to the Khyber Teaching Hospital’s (KTH) burn unit. His elder brother Azizullah, who is an officer at the Higher Education Commission (HEC) in Islamabad, shifted him to the Pakistan Ordnance Factories’ (POF) Hospital in Wah Cantonment, where a specialized burn care centre exists. Doctors said he also received metal shrapnel in his right shoulder.

Journalists across Pakistan have condemned the blasts and asked the government to provide protection to journalists and compensation to Khan’s family.