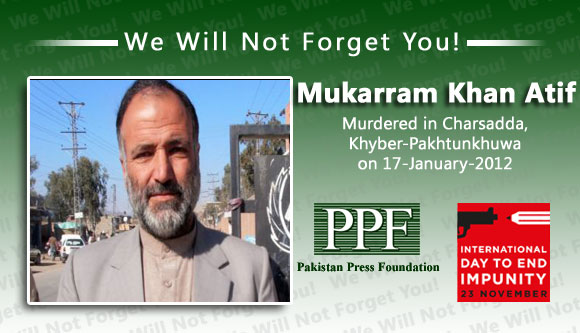 Mukarram Khan Atif, 40, a correspondent for Washington-based Pashto language “Deewa Radio” and a reporter for a private TV channel “Dunya News” was gunned down by militants on January 17, 2012 while he was offering prayer in a mosque in Charsadda District of Khyber-Pakhtunkhuwa province of Pakistan.

According to press reports, a gunman entered in the mosque where Atif was performing evening prayers and shot him several times. He sustained multiple head injuries and was rushed to a nearby hospital in a critical condition but succumbed to his wounds.

The Tehrik-e-Taliban Pakistan (TTP) has claimed responsibility for the killing. TTP spokesman Ihsanullah Ihsan said they killed the journalist because he had refused to give coverage to the Taliban on his radio station. He claimed they had advised the slain journalist repeatedly not to take sides while covering issues related to the Taliban. The spokesman said Atif had been on their hit list and they finally eliminated him. He warned that other journalists were also on the hit list of the TTP and would be killed soon.

Safdar Hayat Dawar, president of the Tribal Union of Journalists (TUJ), told PPF that Atif had received threats in the past from the Taliban in his hometown Mohmand Agency, of the Federally Administrated Tribal Area (FATA), and moved to Charsadda.

Dawar has announced three days of mourning and decided to stage a sit-in outside the Khyber-Pakhtunkhwa Governor’s House on January 18, 2012 against the killing of journalist Atif.