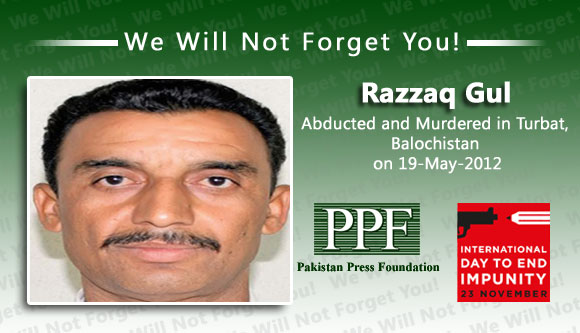 The bullet-riddled body of journalist Razzaq Gul, a correspondent for television station Express News, was found dumped in the town of Turbat in Balochistan province of Pakistan on May 19, 2012. The journalist had been reportedly kidnapped on May 18. Balochistan has been suffering from militancy and instability because of low intensity separatist insurgency and operations of intelligence agencies, resulting in disappearances and deaths of a large number of people.

Gul’s body was found near the Singani Sar area, close to the Old Civil Hospital in Turbat. Gul had received 15 bullets to his head and chest. The body also bore marks of torture. Law enforcement agencies shifted the body to a hospital for an autopsy, where his brother identified him.

According to journalists in Turbat Press Club, Gul had not mentioned that he was receiving death threats. He hadn’t even indicated that his life was in danger. Many journalists refused to comment on the killing owing to security reasons.

Shahzada Zulfiqar, former president of Quetta Press Club, told PPF that Gul left his house late Friday evening without telling his family members, who started searching for him after he did not return. Razzaq’s family members believe that he had been abducted near his residence.

A large number of journalists, Human Rights Commission of Pakistan (HRCP) activists and workers from the Labour Federation staged protest rallies in the province, chanting slogans against the government. They were carrying black flags, placards and banners inscribed with their demands.

Zulfiqar said this murder was another warning to journalists who are performing their duties in extremely dangerous conditions in the province and trying their best to report only the truth and dig out facts as far as possible. He said the continued killing of journalists was aimed at pressuring media and journalists to refrain from reporting the facts.

Shutter down strikes were observed in Balochistan towns of Tump, Mand, Hoshab and Turbat to protest the killing.