Home » Impunity » Journalist killed, house of another attacked in Quetta 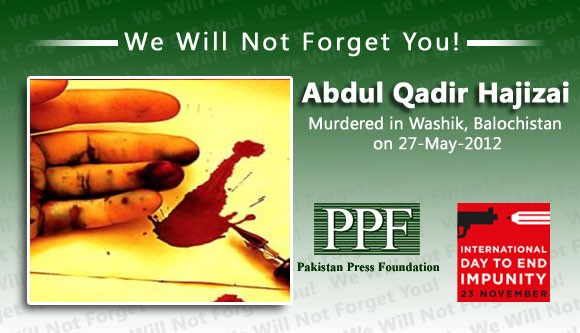 Abdul Qadir Hajizai, a correspondent for the local Balochi-language TV channel WASH TV, was killed on May 27, 2012 when armed men on a motorcycle opened fire on him in Washik district of Balochistan province of Pakistan.

According to press reports, Hajizai was heading home when two armed men opened fire on him. He was critically injured and rushed to a local hospital where he died.

Eesa Tareen, president of the Balochistan Union of Journalists (BUJ), told PPF that a separatist group, Baloch Liberation United Front (BLUF), has assumed responsibility for Hajizai’s murder. They alleged that Hajizai was a government informer and was reporting against them.

Meanwhile, armed men opened fire on the house of the president of the Turbat Press Club, Irshad Akhtar. He and his family remained unhurt in the attack.

Condemning the murder of Hajizai and attack on the house of Akhtar, Tareen said, the BUJ would launch a protest today in front of the Quetta Press Club.

BUJ appealed to the Chief Justice of Pakistan and the Balochistan government to take serious steps to ensure the safety of journalists of Balochistan.

The Pakistan Federal Union of Journalists (PFUJ) strongly condemned the killing of the journalist and firing on the house of the president of the Turbat Press Club. PFUJ Secretary-General Amin Yousuf demanded of the Balochistan government to take notice of the rising cases of murders of journalists, otherwise PFUJ would launch a countrywide protest.