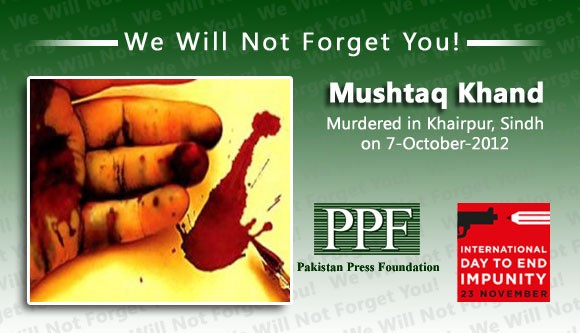 A cameraman for a television channel was killed and three journalists were injured on 7 October 2012 in an attack on a political party gathering. The incident occurred in Khairpur district of Pakistan’s southern Sindh province.

Mushtaque Khand, cameraman for the Dharti TV news channel, was killed while Mukhtiyar Phulpoto, a correspondent for the Awami Awaaz daily, Faheem Mangi, a correspondent for the Naun Sij daily, and freelance journalist Allahdad Rind were injured. Khand was shot in the chest and in the arm and died on the spot. Phulpoto suffered a bullet wound to his arm, Mangi was shot twice, in the chest and in the abdomen, while Rind’s arm was fractured.

The injured were rushed to a local hospital where they were operated upon. Mangi was in critical condition after surgery, while Phulpoto and Rind were in a stable condition. According to press reports, two men with automatic weapons resorted to indiscriminate firing at the gathering of the ruling political party, the Pakistan Peoples’ Party. The assailants managed to escape.

Nafisa Shah Jillani, a local Member of the National Assembly, who was supposed to be the main speaker at the gathering, told the media that the event was an act of political terrorism. She said there were political opponents behind the incident. She demanded an impartial inquiry and said the attack was an attempt to destabilize democracy.