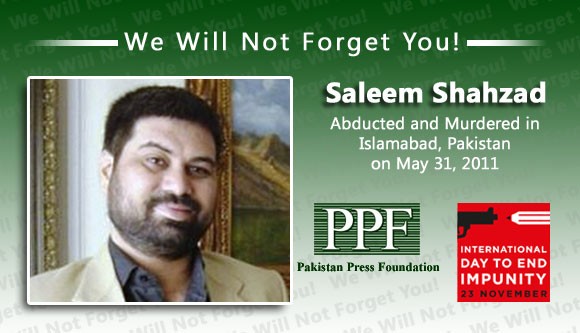 On May 31, 2011, the dead body of Syed Saleem Shahzad, 40, Pakistan Bureau Chief of “Asia Times Online” and South Asia Correspondent for Italian news agency Adnkronos International (AKI), was found in a canal, some 150 km from Pakistan’s capital, Islamabad, from where he was abducted two days earlier. His body is reported to bear marks of torture.

He was abducted at around six pm on May 29, while he was on his way to participate in a television talk show to discuss his investigative report published on May 27 for “Asia Times Online” which said that al-Qaeda had launched a deadly assault on a naval base (Pakistan Naval Station Mehran) in Karachi, the headquarters of the navy’s air wing, on 22 May because talks had failed over the release of several naval personnel arrested on suspicion of links to the militant group’s affiliates.

Ali Dayan Hasan of Human Rights Watch said that Shahzad had previously warned that his life was in danger from the ISI (Inter-Services Intelligence agency). In October 2010, Shahzad sent Human Rights Watch an email saying he was afraid he would be killed by the ISI, Hasan claimed.

President of Pakistan Asif Ali Zardari and Prime Minister Syed Yusuf Raza Gilani issued routine statements expressing deep grief and sorrow and ordered an enquiry into the kidnapping and murder of the journalist. Previous enquiries into the murders of journalists have not been made public and it is not clear if the fate of this enquiry would be any different.

Shahzad leaves behind his wife and three children.