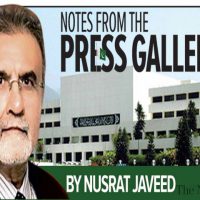 Social media has certainly created a lot of chaos and anarchy all across the world with a flood of fake or manipulated “news.”

It will still not stop a person like me, who did nothing but full-time journalism for three decades, to admit that in countries like Pakistan “citizen journalists,” always beat us when it comes to breaking heart-wrenching but authentic stories.

The Counter Terrorism Department (CTD) of Punjab must have gotten away with its version of killing a wanted “terrorist” along with his presumed accomplices or facilitators past Saturday, if “citizen journalists” were not there.

Thanks to their daring initiatives and courage to post pictures and videos, we finally discovered so many heart-touching sides of a tragic story that had orphaned two little girls and a boy in early teens. Even an incurably stoned heart would find it extremely difficult not to shiver while imagining the trauma these kids might continue to endure for the rest of their lives.

There is no doubt that some leading ministers of the Federal and the Punjab Government sounded as if callously owning and defending the brute conduct of a squad, specifically hired, trained and deputed to protect us from “terrorism” in their early reactions.

But to be fair, one also has to admit that nonstop updates from citizen journalists, going viral on social media, finally put them on the defensive.

Prime Minister Imran Khan felt compelled to remind the “Chief Executive” of the most populous province of Pakistan that he needed to leave Mianwali in haste and rush to the spot.

Although he appeared less effective and assuaging even after reaching there, Osman Buzdar, had to announce formation of a Joint Investigation Team, comprising various law and info-gathering agencies of the state for deep probing of the incident.

Relying on JIT’s initial findings, the law minister of Punjab, Raja Basharat, did sound dropping heavy hints to victims’ connection to a “wanted terrorist” through his presser Sunday.

He miserably failed to explain, however, as to why all people sitting in an apparently cornered and over powered vehicle needed to be killed with showers of close-range shots. Doing so, the trigger-happy personnel looked doubly insensitive while dealing with three abandoned kids.

Anti-Terrorist Squads, anywhere in the world do require real time autonomy and authority to take snap decision. But these privileges were certainly looked abused like a license to kill by the CTD Squad that ‘tackled’ the vehicle, taking an average lower middle class looking family of Lahore to Burewala for attending a marriage too close Sahiwal City.

The number strong opposition in the national assembly was certainly expected to milk the incident for political point scoring at the outset of the Monday sitting. One was thus not surprised when Shahbaz Sharif, the opposition leader, grabbed the mic to demand suspension of the day’s agenda for discussing the Saturday-incident.

The government did not resist. Ali Mohammad Khan and Dr. Shireen Mazari rather stood from the ministerial benches to do away with procedural constraints. But all this eventually led to sickening point scoring. I found it extremely difficult to bear with it and opted to left the assembly building in utter disgust.

Shahbaz Sharif had remained a hands-on type Chief Minister of Punjab for ten years. I genuinely expected him to bring some new shades and aspects of the Saturday-incident, which the citizen journalists could not capture or project for obvious reasons.

But he preferred to make us believe that Osman Buzdar was just a puppet, manipulated 24/7 by the Prime Minister’s Office. All the top administrative officers of the Punjab province seek directions from Imran Khan and his secretariat for micro management of even the routine and banal matters.

Perhaps he was right. But how it could help fathoming the real causes of Saturday-incident and dealing with its blowback is beyond my comprehension.

The Opposition Leader and his colleagues also kept reminding us as to how consistent and vicious Imran Khan had been while directly holding the Sharif brothers for all evils under the sun, when they were in command and control of the federal and the Punjab Government.

It surely was an occasion that the opposition legislators should have used to help us in comprehending the mechanisms set, if any, to ensure an effective oversight of anti-corruption operations by the elected governments, based in Islamabad or in the provincial capitals.

Without focusing on the oversight mechanism and capacity of the elected government, when it comes to managing anti-terrorism business, we can just not ensure that in future the messy and tragic happenings like the Sahiwal tragedy will not be repeated.

“Our representatives,” have their own priorities, though. Shahbaz Sharif and his comrades simply want to hold Imran Khan responsible for the Sahiwal tragedy, due to his allegedly hands-on obsession.

The PTI in Punjab is also crowded with a big crowd of wannabe Chief Ministers. From heart of their hearts, they too are feeling confident that the Sahiwal-incident will force their leader to revisit his decision of selecting Osman Buzdar for running the most populous province of Pakistan. He has failed to prove “Wasim Akram Plus” for his Captain. He needs to send someone else to a difficult pitch.

In the said context, an exhaustive meeting of the PML-Q legislator that Chaudhry Shujaat Hussein presided Monday had looked too intriguing to many reporters hunting for juicy stories.

The PML-Q has ten members in the Punjab Assembly. Their support relishes the make or break leverage with the PTI-led government there. In this column last week I did hint at brewing troubles for the PTI in Punjab. It, however, is too early to imagine the PML-Q quitting the ruling alliance.

Intense efforts are still on to carve out a “forward block” comprising people elected to the Punjab Assembly on the PML-N ticket during the elections of July 2018. Without its surfacing, both Imran Khan and Chaudhries of Gujrat will feel doubly shy to upset the apple cart.