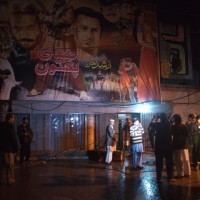 PESHAWAR: When Dasonti Singh ran Sohrab Modi’s Pukar at The Picture House in 1940, the audience fell in love with the old school cinema hall.

The cinema’s future success and viewership was ensured a year later when Singh brought Modi and Prithviraj Kapoor’s Sikandar to the screen. The film immortalised Kapoor as Alexander the Great as he reaches Jhelum after conquering Persia and Kabul and meets Porus, who stops his troops. The sets, production and cast had a Hollywood quality to it and the audience kept coming back for more.

Singh, a Sikh trader, set up the Picture House which is located on Cinema Road, near Qissa Khwani Bazaar in 1931 and ran three shows daily for 83 years till Sunday night’s bombing.

At least three people were killed and 40 injured in a grenade attack on the cinema. According to witnesses, the attack took place during the screening of a Pashto movie Ziddi Pakhtun. “Many of the casualties were caused by a stampede sparked right after,” said cinema employee Tariq Khan. The attack has left some of the oldest seats, walls and gates beyond repair.

This is not the first time the cinema was attacked. In July 2012, it was hit by a low-intensity blast outside the gate while people were watching a motion picture inside. Nearly eight people were injured.

After Sunday’s blast, many film producers, distributors, viewers and others linked with the industry are worried.

Ibrahim Zia, the person behind Peshawar ke fankar: theatre aur filmon mein, a compilation of Peshawar’s theatre and film artistes, told The Express Tribune that the cinema house was one of the most beautiful ones in the city and started off with showing what are now considered Bollywood classics. Zia, also an artist who paints cinema hoardings, said that he remembers seeing a lot of hoardings from that time with Kapoor on them.

In 2012, four cinemas including Shabistan Cinema were set on fire in response to an anti-Islam film released on YouTube. Shabistan could never get back on its feet as producers and filmmakers feared more violence and destruction.

The cinema business is facing a tough time as the number of cinemagoers has gone down and caused several cinema houses to shut down. Security is another issue.

Discussing the security protocol at the Picture House, the police said that they were aware that it was under threat and had asked them to beef up security. But on the day of the blast, there was only one person manning the doors and checking tickets.

Mujtaba, a regular filmgoer, said that most cinemas in the city did not have any security or policemen on guard. He added that Shama Cinema was probably the only one which had made an effort to protect itself.

According to Muzafar Khan, a Pashto film producer, this had a negative effect on the audience and industry. He added that in order to make cinemas more attractive to the audience, cinema owners should introduce new sound systems, better seating and HD screens.

Khan remembers a time the box office used to be sold out, now he says there is some crowd on occasions like Eid.
End credits

Khyber-Pakhtunkhwa Chief Minister Pervez Khattak has ordered two inquiries in the bomb blast at Picture House. He asked the authorities to investigate the incident from all possible angles, take effective measures and arrest the perpetrators.