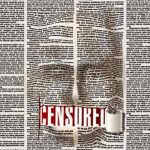 Out of all the many exciting things I could write about this week, I have, for various reasons, chosen to write about the media environment in Pakistan and how journalists seem to be bearing the brunt of the crisis of indirect censorship.

Today, we do not have the clarity of the sort of censorship we had under martial law regimes —missing lines of text from newspaper front pages or public floggings of journalists – but in many ways the situation is worse now because the power equation between the press and the security establishment is not just draconian (a favourite word with anybody who writes on the subject of press restrictions and media history in Pakistan) but also so very insidious.

Yes, the wrath of the authorities in question is often overt and blatant (taking news channels off air, banning certain newspapers in certain areas, pressurising advertisers to withdraw their business, abducting or attacking journalists, charging editors and producers with sedition or cyber terrorism) but what is more disturbing – because it is less obvious — is the insidious manner in which these hawkish authorities have reduced media houses and journalists to a state of desperation and financial insecurity.

But it is not just the news agendas of various channels or publications that is adversely affected and controlled, it is journalists who have to suffer the main fallout. A great number have had to take a reduction in salary to continue in their jobs and many have not been paid for months. Financial levers and pressures can bring any business to its knees and this tactic coupled with hyped up attacks on the reputations of individuals daring to speak up about the constant threats has led to media groups having to make various difficult choices.

One of these difficult choices is: who bears the brunt of this sort of dictatorial state control? Unfortunately, managements seem to have decided that journalists and staffers should bear the brunt of this adverse situation. Staffers’ pay will be delayed for months but executives seem to be getting their substantial salaries on time. Journalists will be asked to take salary cuts, but have executives had to do the same? Consider the case of one columnist who has been contributing a (fairly unique sort of) column to a weekend newspaper for over 20 years, who has now not been paid for …. almost TWO YEARS! Is this because the group has financial issues or is it because, in the pecking order, contributors are the least important people in the production process? Or is it because certain quarters would prefer that columnist not to write at all, so the management thinks this is an easy way to get the columnist to stop?

If it is the latter case, then let’s just conclude this is part of the whole process of muzzling the press. This is because excluding certain print commentators is basically the same as taking problematic ‘news anchors’ off air. Yes, they can branch out on social media, but the sort of reach their work has is not the same so yes, this tactic is proving extremely effective. However, if this is not the case, well then it just illustrates how little senior management in media houses value the people who put together the product that they ‘manage’ and sell….

This is Pakistan’s press today – restricted by chains that are nearly invisible.