Home » Featured » Murder trial of TV anchor, partner to be held in prison 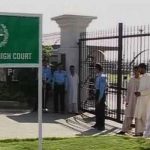 KARACHI: A sessions’ court on Monday one again deferred indictment in a case pertaining to the murder of TV anchor Mureed Abbas after the jail authorities said that the Sindh government had notified the matter for trial inside the prison.

Police had booked and detained an alleged prime suspect, Atif Zaman, for killing his two business partners — Mureed Abbas and Khizar Hayat — in Khayaban-i-Bukhari, DHA, over a financial dispute, on July 9.

On Monday, the additional district and sessions’ judge (South), Rajesh Chandar Rajput, was set to frame the charge against Atif Zaman and his brother Adil Zaman, but the prison authorities failed to produce them before the court.

The defence counsel for the suspects, complainant Zara Abbas and her counsel were present.

The investigating officer of the case produced a letter issued by the provincial home department on Dec 2, which stated that the double murder case had been notified for trial inside the prison due to reported security threats. Therefore, the judge was asked to put off the suspects’ indictment and transfer the matter to the relevant court for its trial inside the jail.

The judge asked his office to issue a reference to the Sindh High Court for passing an appropriate order with regard to the transfer of the present case in view of the home department’s notification.

The judge also put off the hearing till Dec 10.

However, the court also issued a show-cause notice to the prison superintendent for failing to produce the suspects in court and issued their production order.