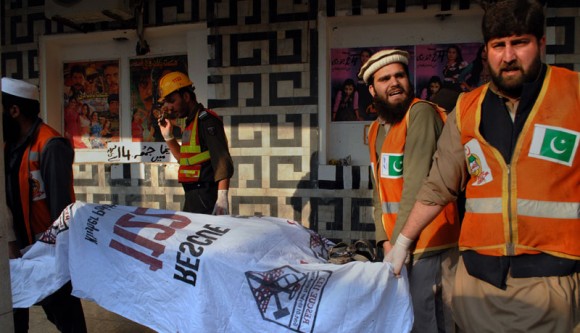 PESHAWAR: Owners on Thursday closed all cinemas in the provincial capital indefinitely over threats of terrorist attacks.

The development comes in the wake of the bombings of two local cinemas, including Picture House near Qissa Khwani and Shama Cinema on Pejagi Road this month, which left at least 18 people dead.

“We have closed the cinema for indefinite period as police have refused to provide us with security. There are threats of terrorist attacks. The best way to handle the situation is to close cinemas close,” manager of a cinema told Dawn.

He said managements of local cinemas had time and again requested police to provide them with security, but to no avail.

The manager said cinemas had private guards, who checked visitors at entrance, but they didn’t have walkthrough gates and detectors for explosives.

“It is impossible for us to adopt expensive security measures on our own for low revenue. There was a time when we had full day and night shows daily but these days, the number has reduced to one or two as the people don’t come even close to cinemas,” he said.

When contacted, Peshawar SSP (Operations) Najeebur Rehman said police had time and again asked owners of cinemas to adopt ‘reasonable’ security measures, appoint young and energetic guards, and install closed circuit television cameras and walkthrough gates on the premises, but to no avail.

“We cannot deploy police at every cinema and shop as we despite being understaffed are fighting militancy and have to cover the areas bordering Khyber Agency,” he said.

The SSP said after the promulgation of the Khyber Pakhtunkhwa Restriction of Rented Buildings (Security) Ordinance and the Khyber Pakhtunkhwa Hotels Restriction (Security) Ordinance, police would ensure the checking of suspected people in buildings.Meanwhile, during a visit to different cinemas in the city on Thursday, Dawn observed that the places were deserted and that the huge panaflex boards with names of different movies were either removed, covered or folded.

The main gates were locked with private guards from behind them asking visitors that cinemas were closed for indefinite period.

Security arrangements there were found to be unsatisfactory causing fears that terrorists could target them without difficulty.

Owners of the cinemas were not available for comments on the situation.