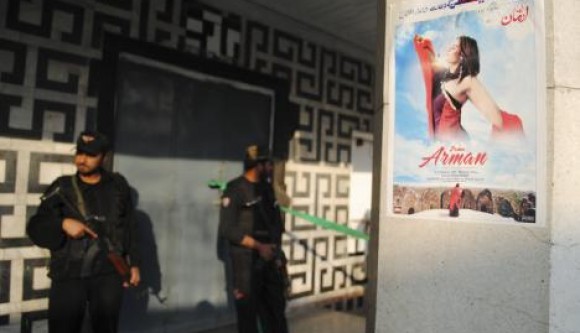 13 people were killed and at least 35 were injured on February 11, 2014 in a grenade attack on Shama Cinema, situated near the busy Bacha Khan Square in Peshawar, the capital city of Khyber-Pakhtunkhuwa province. The cinema was known for sometimes showing pornographic films in one of its auditoriums. No one has claimed responsibility for the attack. The blast at the cinema came 11 days after a similar attack at Picture House Cinema, situated in the Kabuli Bazaar area of Peshawar.

Capital City Police Officer (CCPO) Ejaz Ahmed said that three grenades were thrown in the cinema hall during a show. The first hand grenade was detonated near the the front, the second in the back of the cinema, and the third blast followed. Up to 80 people were present in the cinema at the time of the explosions, according to the police officer.

The onwers of Shama Cinema had been receiving threats and had informed the police accordingly. However, the police did not take any steps besides directing the cinema owners to install CCTV cameras.

Condemning the incident, political leaders termed it a step to derail peace talks between the Government and representatives of the Taliban. Pakistani Taliban spokesman Shahidullah Shahid condemned the incident and denied any involvement of Tehrik-e-Taliban.

Two hand grenades were lobbed inside the Picture House cinema during the screening of a Pashto film Zidi Pakhtun (stubborn Pakhtun) on February 2, in Peshawar, the capital of Khyber-Pakhtunkhwa province of Pakistan which borders Aghanistan. PPF reported on February 3 that the Pakistani Taliban group Jundallah had claimed responsibility for the attack, in retaliation for the screening of the film which was considered “anti-Shariah”.

According to the police report, the grenades were hurled by a person seated near the back of the theatre.

One of the hand-grenades landed in the middle of the cinema and the other on the head of a man in the audience. Five people were killed and more than 30 were injured.

Police said that cinema houses in the city were already under threat and they had warned the cinema house owners of the attacks and asked them to make proper security arrangements. However, the cinema administration was found to be careless and neglectful.