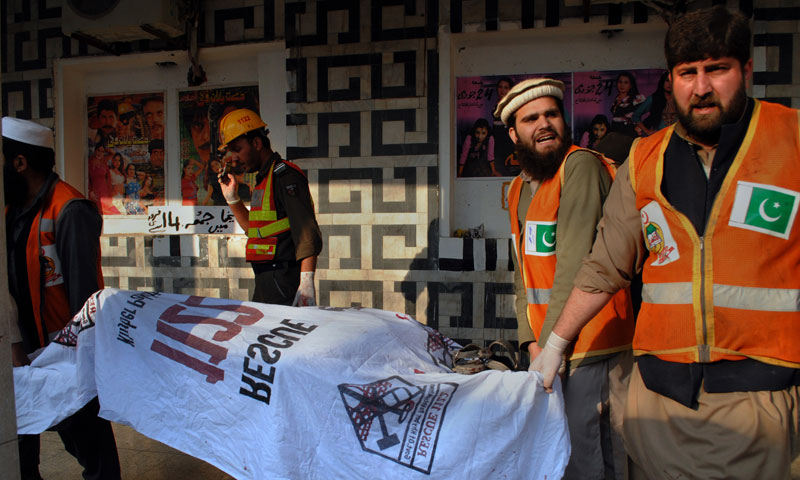 PESHAWAR: Hopes for a respite from terror attacks raised by peace talks between government and Taliban negotiators were dashed yet again when a triple grenade attack on a cinema left 13 people dead and 23 injured here on Tuesday.

According to Reuters news agency, Taliban spokesman Shahidullah Shahid denied his group’s involvement and there was no immediate claim of responsibility from any other militant group.

According to a police official, the grenades were hurled by someone inside the Shama Cinema on Pajagi Road. The victims were watching a Pashto movie, Yarana.

It was the second such attack on a cinema hall in 10 days. On Feb 2, five people were killed and 30 injured when grenades exploded in the Picture House, near the Khan Raziq police station.

Peshawar police chief Ijaz Khan said his department had already informed administrations of cinema halls about threats they faced and advised them to strengthen their security.

“Chinese-made hand-grenades were used in the attack,” he said.

“The first explosion took place about 30 minutes after the film began,” injured Wazir Mohammad said in the Lady Reading Hospital. Everyone ran to the exit but there was another explosion when he reached near the gate and was hit by pellets on his legs.

An eyewitness said he saw pools of blood on the floor and a number of seats destroyed.

Afghan refugee Gulbahar Khan told Dawn that he and his friend were watching the film and they couldn’t see who hurled the grenades because of darkness in the hall. “I received wounds on my back,” he said.

The manager and other staff of the cinema fled after the explosions, a policeman said when asked about security measures taken in the wake of threats.

The police official said two grenades had been lobbed towards the rear of the hall and the third one towards the exit.

An employee standing outside the Picture House which was attacked on Feb 2 said the number of film viewers since the attack had decreased drastically from about 150 in the two daytime shows to 40 and to only 10 to 12 in the night shows.