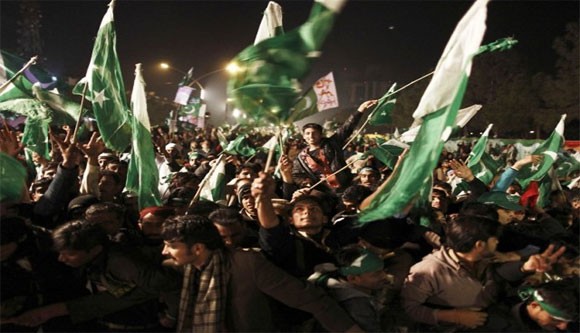 Reportedly, the crowd count was around 20,000 when Dr Tahirul Qadri began his speech. The protest site wore a populated look.

As Dr Qadri took the stage, some people misbehaved with media persons particularly with women journalists belonging to a private TV channel. After the journalists complained to their concerned media houses and the Pakistan Federal Union of Journalists (PFUJ), Minhjul Quran organisers announced that those who indulged in such acts were not members of Minhajul Quran and blamed the incident on miscreants who were “out to disrupt the long march”.

Female journalist Nosheen, speaking to a private TV channel alleged that she identified the people who misbehaved with them and that they were volunteers of TMQ.

PFUJ former president Mazhar Abbas said that he had received messages from a female journalist alleging that some men in the TMQ procession had harassed her.

The TMQ chief and his followers had been continuously expressing their irritation toward the media for saying that the crowd did not number in millions. The TMQ chief claimed that millions of people comprising men, women and children had reached Islamabad and were participating in the long march. It was also witnessed that a few people inside the crowd chanted slogans against senior TV anchorperson Hamid Mir for being biased and partial towards TMQ.

Hamid Mir in a message published in the social media wrote, “Both supporters and opponents of Qadri bashing media we are only with the supremacy of constitution the only consensus document.”

The Parliamentary Reporters Association and other organisations of journalists have strongly condemned the harassment of journalists covering the long march by the workers of Tehreek-e-Minhajul Quran. In a statement, the Parliamentary Reporters Association Interim President Siddique Sajid demanded from Dr Tahirul Qadri to take strict action against the workers and security guards present in the long march venue who manhandled the journalists, particularly female journalists. He also demanded that the journalists should be freely allowed to perform their professional duties.