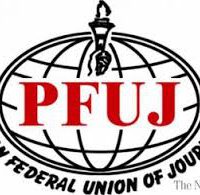 ISLAMABAD: National Press Club (NPC) was live with sentiments of love and respect for pride of journalism in Pakistan, Hussain Naqi. Senior and junior mediapersons clapped, embraced and adored him with shower of rose petals on his arrival. Naqi was the chief guest at the NPC in the reception organised by the Club as well […] 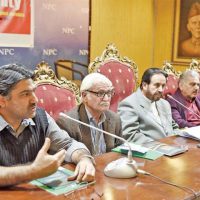 ISLAMABAD: As many as 26 journalists have been murdered in the country during the last five years and none of the killers have been punished, said a report launched on Friday. The report, formulated by ‘Freedomnetwork’, was set to be launched on November 2 — the International Day to End Impunity for Crimes Against Journalists […]

By: Noor Aftab ISLAMABAD: The representatives of mainstream political parties on Thursday vowed that draft of the bill would be prepared and get passed in the Parliament to provide complete security and protection to the journalists and their family members. Addressing the meeting of executive council of Pakistan Federal Union of Journalists (PFUJ) held at …

ISLAMABAD: Pakistan Tahreek-e-Insaf (PTI) Chairman Imran Khan has said journalists are not for sale and media workers have played an important role in restoration of democracy and sustainability in the country. Talking to a delegation of Pakistan Federation of Union of Journalists (PFUJ) at his residence in Bani Gala, he said the government tried to …

ISLAMABAD: Pakistan Tehreek-e-Insaf Chairman Imran Khan on Thursday condemned the attacks on the Geo News offices and assured that if any of his workers was found involved in this criminal act, he would expel him from the party. “I ask my party workers to show regard for all media workers, including those of Geo News, …

Activists of two political parties once again attacked the offices of Geo television network on the night of September 7, 2014. Nobody was injured in the attack. According to press reports, protesters belonging to Pakistan Tehrek-e-Insaf (PTI) and Pakistan Awami Tehreek (PAT) vandalised the premises of Geo TV, as well as Daily “The News” and …

ISLAMABAD: At least 28 journalists, cameramen and media workers were injured in attack by Punjab police n Islamabad on August 31. The police attack came during clashes between personnel of law enforcement agencies and activists of two political parties, Pakistan Awami Tehreek (PAT) and Pakistan Tehreek-i-Insaf (PTI) The media persons came under attack while they …