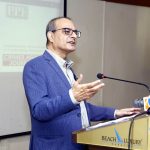 KARACHI: The hapless families of the murdered newsmen on Saturday asked the journalists fraternity to step up the fight with the state for ending the unshakeable impunity the murderers enjoy.

Unfolding their ordeals in pursuance of justice for their loved ones, who were murdered by the state’s functionaries or government’s departments just for exposing the social crimes, they said all platforms from police to judiciary did not help them.

“State is not giving protection to the journalists,” Fouzia Dahar, sister of the murdered journalist, Shan Dahar, said at the launch of “Guidelines for Documenting and Confronting Impunity for Crimes against Journalists Report” at a local hotel, which was organized by Pakistan Press Foundation.

She said it will be the journalists themselves to fight with the state for thier right to protection as there are no intentions of the governments or its system to ensure a free speech society.

No one will scrape the unshakable impunity to the murderers of journalists, she said the newsmen fraternity that is a voice for the helpless people often remains voiceless when they are victims.

“I have left no platforms for justice,” she said that there is still no justice insight for her slain brother. She blamed the police department for spoiling Shan’s murder case. Police report suggests the killers are absconders, but in real, they are still in the same city.

She said a media house which Shan Dahar was associated immediately distanced itself from the case. However, she appreciated the journalists for continuing support.

Salman Zubair, son of slain journalist – Zubair Mujahid, also accused the police for his father’s murder. He said that his late father unearthed Munno Bheel and Naeem Arain cases, which became a primary reason for his murder.

He said the doctors also did not treat him properly at the hospital. The newspaper, which his father was working with even refused to pay them with wages and arrears, which Zubair Mujahid owed to it.

“Media is not free,” he said adding that the tight censorship still exists to gag the journalists from speaking out.

Owais Aslam Ali, secretary Pakistan Press Foundation said that destroying evidence in journalists murder cases has become a routine procedure. Only five murderers out of 75 have been convicted so far, he added.

He urged the journalists to register cases of threats, harassments, murder or any crimes against them under the concerned law to help the investigation and prosecution reach a logical end.

He also talked about the relevant commission’s role in protection of journalists. Senior Journalists including Ghazala Fasih, Mubasher Bukhari, Aamir Latif and Faheem Siddiqui also spoke during the event.