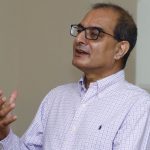 Owais Aslam Ali, Secretary General, Pakistan Press Foundation (PPF) made an impromptu impassioned plea to governments to match their words in support of press freedom and safety of journalists with effective actions.  He said civil society organizations work under tremendous pressures under very difficult counties and it is time for governments to focus on actions rather than words.

Stakeholders, including government ministers, high officials and diplomats as well as civil society representatives had gathered in Vienna, Austria on November 3-4 at the High-Level Multi-Stakeholder Conference on the Safety of Journalists to track progress of the United Nations Plan of Action on the Safety of Journalists and the Issue of Impunity that came into existence a decade ago.

Starting the discussion Chocarro noted that since the creation of the UN Plan, the need to protect journalists was “definitely higher” on political agendas and many initiatives had been put in place.  “But the diversity and complexity of the issues are growing,” she said, adding: “We need to find new solutions. At the same time, however, we see ourselves, civil society, repeating some recommendations again and again, and this can’t go on.”

“We know that the safety challenges facing journalists are highly complex and we also know that they are seriously systemic and this calls for serious systemic solutions. We now have to plan for long-term strategic and concerted efforts at scale and the issue of scale is extremely important,” said Hojberg.

“We need to involve a broad range of global and local actors. We want to see this facilitated by the UN and supported by UN member states and in particular those of you who have committed yourself to the safety of journalists.”

The rapporteurs acknowledged and highlighted the importance of the role of local civil society organizations.

“UN bodies and mechanisms and support from states played a vital part in developing and supporting the United Nations Plan of Action. However, the rock stars over the last decades have been local civil society organizations,” said Ali.

“The priority over the next decades should be to develop the long-term sustainability of civil society organizations rather than merely supporting the development of their capacity to perform such vital roles and tasks as monitoring and highlighting attacks on journalists.

“Local civil society organizations are on the frontline of defending and promoting press freedom and safety of journalists often under very difficult circumstances and their contributions must be recognized.”

The civil society rapporteurs presented a summary of the draft recommendations that have been divided thematically into six categories: addressing gender-based attacks against journalists, strengthening support for monitoring attacks, bolstering national safety mechanisms, tackling impunity for crimes against journalists, tech and safety, and making the UN Plan more effective.

With regards to gender, it was noted that the voices, needs and human rights of women journalists should be at the center of the UN plan of action.

Monitoring was recognized as the heart of any safety strategy and the need for support to establish independent civil society-led reporting platforms at national, regional and global levels was emphasized.

The need to address impunity at the forefront of the work being done was reiterated.

The rapporteurs also noted that the engagement of tech companies has been “far too low” amidst increasing online violence.

With regards to the UN system, they recommended the establishment of a multi-stakeholder advisory body to oversee and guide the effective coordination and implementation of the UN Plan. This body should include gender expertise.

The civil society called on the UN to step up more often and take the lead on coordinating the inputs of the international community on the issue.

The complete remarks by the civil society can be viewed here:

The draft recommendations can be read here: https://www.mediasupport.org/wp-content/uploads/2022/11/3-NOV-DRAFT-CIVIL-SOCIETY-CALL-FOR-ACTION.pdf