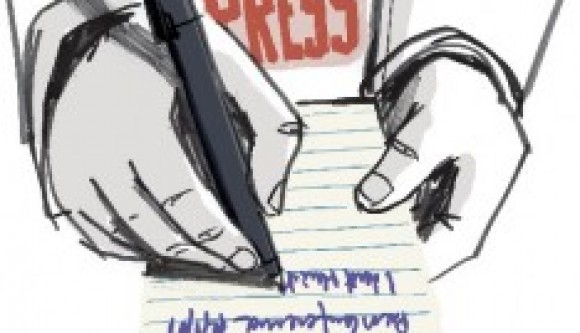 KARACHI: Local and foreign journalists while speaking during the three-day International Media Conference, jointly organised by IFJ, PFUJ and KUJ, called for fair reporting to bring peace and justice at the international level.

The conference, which started on Friday at a local hotel, concluded on Sunday. Journalists from 15 countries representing International Federation of Journalists (IFJ) and other journalist unions attended the event.

The declaration issued after the event demanded of the Government of Pakistan to respect and implement all international instruments for the protection of journalists.

The declaration further called upon authorities to establish the right of the families of the killed journalists for compensation, directly or through media outlets, and the setting up of a solidarity fund for the victims.

Speakers during the sessions of the conference said that media organisations have moral responsibility to ensure safety of their journalists including provision of medical care and life insurance.

The declaration noted that media editors have a responsibility to systematically publicise crimes against journalists, investigate them as thoroughly as possible and expose any failure on part of the government and justice system to make the perpetrators accountable for their crimes.

Sabina Inderjeet, an Indian journalist, spoke on democratic media in India and Pakistan and said that there was press freedom in India and tremendous growth has been witnessed in its media industry. Except the emergency of 1975-77, there is no state censorship. It goes without saying that thanks to vibrant media, India is a vibrant democracy.

William Oloo, President Kenya Correspondent Association (KCA), spoke on embedded journalism, saying it is not a good reporting form and sounds more like a travelogue because the authorities posted in war zones do not allow proper access to news. Thus, it becomes a PR exercise, he said adding that embedded journalism is not true journalism and accuracy is often compromised. “As a matter of fact, truth becomes a big issue and there are increasing questions on the objectivity of embedded journalists and media,” he said.

Speaking on the rise of social media, Martin O’Hanlon, President CWAISCA Canada, said that traditional media plays a better role in providing factual, unbiased, ethical coverage. He said that it was a challenge for traditional media companies to retain readership and to make money from online products.

About 72 percent of journalists consider the social media to be important to the performance of their daily work, he added.

Sameera Aziz, a journalist and film-maker from Saudi Arabia, spoke on the gender dimensions of media. She highlighted several issues which female journalists face. She said that female representation on top-level position across media organizations in different countries is insufficient. She said that gender studies should me made part of the curricula in order to sensitise people about gender issues.

Veteran journalist, Qammar Abbas Jafri spoke on the subject, ‘beyond geographical divide: media as a connecting tool.’ Speaking on the occasion, former President PFJU Pervez Shaukat laid emphasis on the unity of the journalist community.