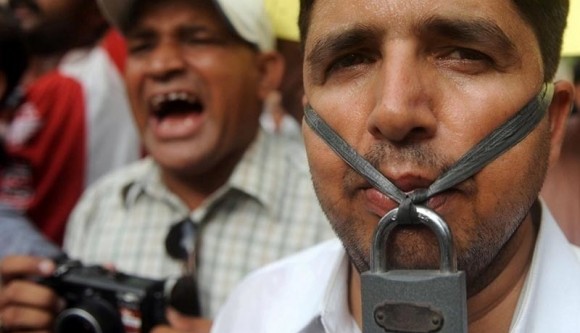 WASHINGTON: Reporters Without Borders, which campaigns for media freedom around the world, issued a freedom index on Sunday to mark the World Press Freedom Day.

According to this index, Finland tops the list of the countries with a free media, followed by two other Scandinavian countries – Norway and Denmark.

Eritrea is at the bottom along with Turkmenistan and North Korea.

China, Cuba, Zimbabwe and Afghanistan are also at the bottom.

The United States dropped from 20 in 2010 to 49 in 2015, four steps above Haiti, Burkina Faso, Namibia and El Salvador. Suriname, Samoa and the eastern Caribbean rank higher than the United States.

Frequent police and public attacks on journalists, coercion to reveal sources and the government’s failure to pass a law protecting journalists caused this fall.

The report points out that last month, a Pakistani parliamentary committee approved a draconian law for controlling the Internet.

Reporters Without Borders notes that the latest draft of the Prevention of Electronic Crimes Act “undermines civil liberties in Pakistan and flouts freedom of the media and information”.

It also notes that the bill contains provisions that would allow the government to censor any content without referring to judge, to use overly broad criteria to criminalise many online activities, and to gain access to Internet user data without any judicial control.

The report also noted that there has been a resurgence of violent attacks on media groups that criticise the military, including the ISI. During 2014, non-state actors also continued to target journalists, the report adds.

The report points out that Pakistan Tehreek-i-Insaf also attacked journalists who criticised its activities.

Two journalists were gunned down in October, bringing the number murdered since August to four.

Also in July, unidentified people bombed the home of the Peshawar bureau chief of a Pakistani television channel.

In May and June, a journalist was attacked in Multan and trucks carrying newspapers were torched.

In June, the Pakistan Electronic Media Regulatory Authority temporarily closed the transmission of a television channel in various areas.