Home » Featured » Show of solidarity with Dawn over threats 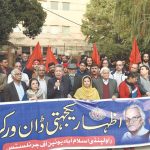 ISLAMABAD: A large number of journalists, media workers, civil society activists, politicians, labour leaders and students assembled outside the offices of daily Dawn across the country on Thursday to show solidarity with the staff in the wake of an episode earlier this week in which a mob besieged the newspaper’s Islamabad bureau.

The unidentified men were protesting the publication of a report in Dawn which described the man who stabbed two people to death in London last week as of Pakistan descent.

In Karachi, a demonstration was held outside Dawn’s offices on Dr Ziauddin Road as part of the show of solidarity with its management and staffers.

Addressing the gathering, Zaffar Abbas, the Editor, said media organisations were coming under attack one after the other. Civil society needs unity to discourage this ominous trend, he observed.

“When Geo is attacked, we remain quiet,” Mr Abbas said. “When Dawn is attacked, most of us, again, remain quiet. When some elements try to disrupt the distribution of Jang and The News, their rivals tend to take advantage of the situation.

“We, the editors as well as the owners, must try to understand that if an unfortunate incident can befall one, it can befall others too. That’s why we all need to stand together.”

During the protest in Islamabad, former Senator Farhatullah Babar of the PPP said the siege of Dawn’s offices in the federal capital seemed to be part of a concerted campaign under which distribution of certain newspapers was disrupted across the country and then media houses were pressured to sack some journalists.

“Now mobs are being sent to harass the media. First a federal minister tweeted against Dawn and within 24 hours, a mob laid siege to its offices. Curiously, the mob was chanting slogans in favour of an intelligence agency. This raises questions.

“The defence ministry should release a statement to dissociate the intelligence agency from the incident,” the senator said.

Afrasiab Khattak, a former senator, described the situation as no different from martial law, but added that the resort to hooliganism was a new threat. He said it was unfortunate that political parties were silent at a time when hidden forces were trying to take the law into their own hands.

“I fear that political parties will face the same situation one day if we don’t nip the evil in the bud. Lawlessness yields to chaos,” Mr Khattak warned.

Mohsin Dawar, an independent member of the National Assembly from tribal districts of Khyber Pakhtun­khwa, visited Dawn’s offices in Islamabad to show solidarity with the staff.

A former MPA of the National Party, Yasmeen Lehri, said the first step to suppression of democracy was to silence all voices of dissent.

Nasir Zaidi, the PFUJ’s general secretary, said the media was “ready to start a movement” for freedom of speech.

Ayub Malik, who heads the Punjab chapter of the National Party, said that “our rulers have emulated the British by ruling through feudals and influentials”.

“Dawn has been facing problems as it tries to create a link between the state and the masses. This is not acceptable to the decision-makers,” he said,

Syed Amjad Shah, vice chairman, and Sher Muhammad Khan, chairman of the executive committee of the Pakistan Bar Council, have condemned the show of threat against Dawn.

In Lahore, the Punjab Union of Journalists and the Dawn Workers Union held a demonstration outside the office of Dawn.

Mansoor Malik, Dawn Union’s general secretary, termed the attack in Islamabad an attempt to intimidate the media. He called upon journalists to unite in the face of a sinister campaign to throttle all forms of dissent.

In Peshawar, the Khyber Union of Journalists (KhUJ) organised a protest in front of the Peshawar Press Club. It was led by KhUJ president Fida Khattak and general secretary Muhammad Naeem.

In Quetta, Haji Lashkari Raisani, a former senator and leader of the Balochistan National Party-Mengal, visited the Dawn office.

“We condemn the hidden hands that have wrapped society in a state of depression,” he said.