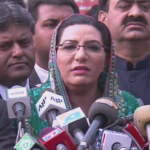 ISLAMABAD: Special Assistant to the Prime Minister on Information Dr Firdous Ashiq Awan said on Thursday that freedom of expression was a constitutional right of all citizens. But at the same time, she said the media should also understand its responsibility and protect interests of the state.

“The responsible role of media should be promoted and it is attached with self-regulation,” she said while briefing the National Assem­bly Standing Commit­tee on Information & Broadcasting.

The meeting, held at the office of the Pakistan Electronic Media Regula­tory Authority, discussed a recent act of hooliganism outside the Islamabad offices of Dawn, which was followed by similar protests in other cities.

The issue was raised by Dr Nafisa Shah of the Pakistan Peoples Party (PPP), who demanded an explanation from the PM’s special assistant regarding the government’s position over the aggressive protest demonstrations which included blocking of entrance to Dawn’s offices.

“This government belie­ves in freedom of information and wants to facilitate media in executing its professional duties,” Dr Awan said, adding that at the same time the media also had some obligations to fulfil.

The PM’s special assistant lauded the responsible attitude of Pakistani media, especially in matters related to the Kashmir issue, and all sensitive matters, including the topic of blasphemy.

“But this story [a reference to a report recently published in Dawn] has damaged the image of the state and the protest was in reaction to it by concerned citizens.” The procedure of the protesters was not right, she said, adding: “We acknowledge that the right to criticism should not be in the form of threats.”

She informed the committee that she had received information about the protests soon after they started outside the offices of Dawn and DawnNews on Monday. She said she called officials of the Islamabad administration and police and urged them to provide protection to the building and employees of the media house.

“Eventually, the protesters dispersed peacefully after registering their protest,” the meeting was informed.

The chairperson of the committee, Mian Javed Latif, responded in a soft tone, saying that there was some confusion in the country.

“The leadership of the country has been speaking about sensitive issues, including terrorism and Al Qaeda, abroad. But when people and media start writing in the similar way then it is taken as a threat,” he said.

The Express Tribune: ‘Media Should Play its role responsibly’