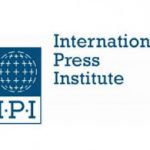 The undersigned members of the global Executive ~ of the International Press Institute (IPI) vehemently condemn death threats made against fellow P1 Executive Board member and Dawn editor Zaffar Abbas as well as Dawn CEO Hamid Haroon during demonstrations outside the offices of Dawn in Pakistan.

“On December 3 protestors laid siege to Dawn’s Islamabad office, with similar protests following outside the Karachi Press Club and Dawn’s offices in that city. Demonstrators carried banners branding Haroon and Abbas as “traitors” and demanding that they be hanged.

“The demonstrations followed strong criticism of Dawn, a leading English language daily, on social media by political leaders in Pakistan for its coverage of the recent London Bridge attack in which it described the attacker as a person of Pakistani origin.

“We are deeply shocked and outraged over these events, which seriously endanger the safety of journalists working at Dawn and which lay bare the growing and apparently politically motivated intolerance toward independent journalism in Pakistan.

“Dawn has been a bastion of independent journalism for over seven decades and it is the responsibility of Pakistan’s government to guarantee the safety of its journalists. We call on all political leaders in Pakistan to immediately refrain from any actions that may appear encourage or condone attacks on the press.

“This latest incident, as well as recent attacks against other news organizations, come amid ongoing, well-documented repression of independent voices and intimidation of journalists in the country, which is undermining the free flow of information necessary to democracy.

“Attacks such as this week’s threats against Dawn seriously breach democratic norms and must never be tolerated. We therefore call on the Pakistani authorities to immediately open an investigation into these incidents and bring to justice all those responsible for the death threats to Abbas and Haroon.

“IPI, the global network of editors, media executives and leading journalists for press freedom, stands firmly behind Dawn and its journalists.”