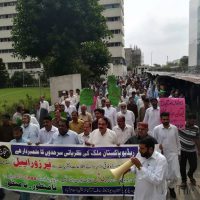 Employees of Radio Pakistan on Monday held a peaceful demonstration in Islamabad and other Units of the organization across the country in protest against the decision of the government to lease out Pakistan Broadcasting Corporation Headquarters building.

Employees of all the wings of the national broadcaster participated in the demonstrations and demanded the government to withdraw its decision.

They said Radio Pakistan is a historical institution projecting the soft image of the country across the world.

Later, the minister said the headquarters is not being shifted within a month. He said the employees will be consulted regarding the issue.

They said Radio Pakistan is a national institution and it needs to be strengthened.

Talking to media on the occasion, Marriyum Aurangzeb urged the government to avoid taking this step.  She said the opposition will support the government for reforms but nothing should be done against the interest of national institutions.