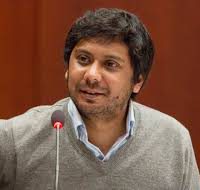 As a three-judge bench, headed by Justice Syed Mazahar Ali Akbar Naqvi, resumed hearing, Mr Abbasi made his appearance along with his counsel Naseer Ahmad Bhutta. Justice Atir Mahmood and Justice Chaudhry Masood Jahangir are other members of the bench.

About the non-appearance of Mr Sharif, advocate Bhutta informed the bench that since the former prime minister was busy receiving condolences over the death of his wife, he was unable to attend the hearing. However, the lawyer undertook that Mr Sharif will appear before the court at the next hearing.

Asked about Mr Almeida, advocate Ahmad Rauf told the bench that he had instructions to appear on behalf of the journalist since his client was in Karachi.

Justice Naqvi asked the counsel whether he could give an assurance to the court that his client would appear in court on the next date of hearing. Mr Rauf replied he was not in a position to do so. However, he said he would withdraw his power of attorney if his client failed to appear on the next date.

The judge observed that despite issuance of three notices to the respondent journalist, he had failed to comply with the order of the court.

“In this view of the matter we are left with no option except to issue non-bailable warrants of arrest against Cyril Almeida,” reads a written order of the bench.

It directed the Lahore DIG operations to execute warrants on Cyril Almeida and produce him before the court on the next date of hearing. “Keeping in view the past conduct of the respondent, we have been persuaded to direct that his name shall be placed in Exit Control List forthwith,” the bench said. It directed a deputy attorney general to establish contact with the quarters concerned for the needful. The bench adjourned the hearing to Oct 8 and directed all the respondents in the case to file their written replies before the next hearing.

Amina Malik had based her petition on an interview given by Mr Sharif to Dawn on May 11 this year in which he had said the “attacks in Mumbai (in 2008) were carried out by people from Pakistan”.

After the publication of the interview, the National Security Council held a meeting to deliberate on the matter. Shahid Khaqan Abbasi, who was prime minister at the time, called upon Mr Sharif to take him into confidence about the deliberations.

According to the petitioner, Mr Abbasi’s action amounted to sedition as he had violated his oath of office.

The notice served on Cyril Almeida was delivered at Dawn’s Islamabad bureau in the middle of last week, and journalists and officials at the bureau say the earlier two notices were never delivered. Mr Almeida, like all Dawn staffers, is a law abiding citizen, and sincerely believes in the rule of law. He is a seasoned journalist and has never shied away from such matters.

Back in 2016 he had rushed back from his assignment of covering the US presidential elections only to appear before a high-level inquiry tribunal set up by the government to probe a story published by Dawn. There is absolutely no question of him not being present at the next hearing on October 8, as desired by the honourable court. He will certainly be there.

Mr Almeida has no immediate plans to travel abroad, and will attend the proceedings of the case whenever desired by the honourable court. Therefore, the honourable ben­ch of the LHC may like to withdraw the non-bailable warrants of arrest, and the instructions given to put his name on the ECL.