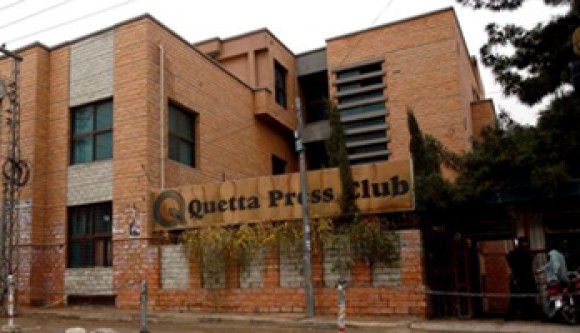 ISLAMABAD: Quetta Press Club has received a threatening letter from little-known terror outfit Fidayan-e-Islam, demanding that entry of Christian members of the club should be banned.

Khalil Ahmad, the club’s Secretary Finance, told JournalismPakistan.com that a First Information Report (FIR) has also been lodged with the police.

“They (Fidayan-e-Islam) said the Christian members of the club preach Christianity to their colleagues; therefore their entry should be banned with immediate effect. Otherwise, they would bomb the press club,” he said.

Ahmad said there are only eight to ten Christian members including cameramen and photographers. The club received the letter through mail Saturday morning.

Capital City Police Officer (Quetta) Abdul Razzaq Cheema visited the club shortly after the letter was received and walkthrough gates were installed at the club entrance.

“We are also preparing a list of members and non-members of the club as we want to restrict the non-members to only press conferences and other relevant events in the club,” Ahmad said.

Ahmad who is also Bureau Chief of ’92 News’ said that CCTV cameras are also being installed at the club to keep an eye on “miscreants and outsiders.”