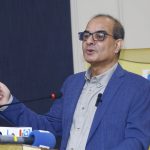 Amidst impassioned and first hand accounts of impact of the murder of journalists in Pakistan, members of the civil society, journalists and media bodies gathered on November 26 for the launch of Pakistan Press Foundation’s (PPF) ‘Guidelines for Documenting and Confronting Impunity for Crimes Against Journalists.

The report tracks gaps in the judicial process for the murder of journalists in Pakistan. PPF found that of the 76 cases where journalists were killed — either in targeted killings or while assignment — since 2002, there have been convictions in only five instances.

The report found that impunity plagues progress in cases against those behind the murder of journalists. PPF looked at case studies of some of the murder cases to highlight the various outcomes in murder cases including: convictions, settlements via blood money, reinvestigations, classes categorized as ‘A-Class’ or remaining shrouded in mystery.

Additionally, PPF has presented a set of recommendations which it believes can help tackle the culture of impunity that surrounds murders of journalists and help reduce the lack of progress in investigations in such cases.

Kickstarting the launch, PPF Secretary General Owais Aslam Ali lamented that in Pakistan, if you murder a journalist, you are able to roam free.

Fauzia Dahar, the sister of Shan Dahar, Bureau Chief of Abb Takk Television channel in Larkana district of Sindh who was shot by armed men and taken to a local hospital where he remained unattended until his passing on January 1, 2014, addressed the audience presenting a heartbreaking first hand account.

Dahar noted that the police had ruined her brother’s case by not properly investigating it and she shared the lack of solidarity she had received in pursuing the case from Shan’s former employers, Abb Takk Television.

Dahar said that after her brother’s death she was told by the network that here (in Pakistan), journalists are murdered daily, how many could they help. She was also told that she was there so what did they need to do?

She questioned that while in 20 years, the safety legislation may lead to progress, how many journalists would be lost in that time?

In another passionate account, Salman Zubair, son of Zubair Mujahid, the daily Jang who was shot dead on November 23, 2007 while traveling on a motorcycle with another journalist in Mirpurkhas, Sindh, shared his family’s ordeal after his father’s murder.

He thanked PPF and international organization, Free Press Unlimited, for their support, in his father’s case.

Addressing the event, senior journalist and editor Ghazalah Fasih noted the challenges journalists face, in particular women journalists. She said that while journalists are the eyes of the society, impunity in crimes against the media prevails.

Senior journalist Mubasher Bukhari said that when a journalist is murdered it is not just a physical loss of that individual but a societal murder that takes place. He noted that over the years, the gagging of the media has become more intense.

Pakistan Federal Union of Journalists (PFUJ) Assistant Secretary General Aamir Latif said that what was required to tackle the culture of impunity in the murder of journalists, was one example in which culprits were deprived impunity.

Geo News Bureau Chief and Karachi Union of Journalists General Secretary Faheem Siddiqui commended the work being done by PPF and noted that such organizations are doing the work that the media should be doing.

In a noteworthy mention, as a member of the Sindh Commission for Protection of Journalists and other Media Professionals, Siddiqui assured Fauzia Dahar that the case of her brother will be included in the first agenda for the Commission.