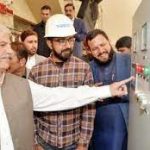 BAJAUR: A jirga succeeded to resolve a dispute between local journalists and the staff of district headquarters hospital Khar here on Thursday.

The jirga comprised of local MNA, political leaders figures and officials of the district administration held several meetings with both the parties to resolve the issue.

The local journalists alleged that medical superintendent Dr Liqat Khan along with other staffers thrashed a local reporter, Zahid Jan, when he was busy in coverage of a protest demonstration at the hospital.

The protest was held on November 26 against delay in postmortem of two PPP workers, who were shot dead by unidentified persons in Salarzai tehsil on the same day.

The management of the hospital and journalists had announced to register cases against each other. However, the jirga persuaded them to resolve the issue amicably.

The jirga members expressed their pleasure over amicable resolution of the issue. They said that a conflict between the management of district headquarters hospital and local journalists was a matter of serious concerns for them as it could affect the residents of the entire district.