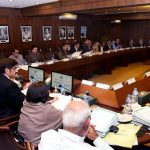 KARACHI- The provincial cabinet has re-issued orders for Sindh police officers to stay away from media interaction by appearing in television talk shows and press conferences, sources said on Thursday.

Police sources said that Sindh cabinet has directed security officers again to avoid appearing in media talks shows and press conferences. However, they were permitted to provide their performance reports through press releases. The cabinet issued strict orders to police officers not to violate the government’s instructions.

Sources said that police performance is not highlighted among the citizens and institutions due to staying away from the media interactions. It is said that district police officers have also complained to the higher authorities for the imposing of the ban which is damaging the morale of the department. On December 12, the Sindh government had imposed a ban on officers, especially from the police department to appear in media talks and television shows.

The provincial authorities have issued a notification which was sent to 11 government departments including police forces. According to the notification, Sindh govt officers and civil servants have been restricted to interact with media and appear in any television talk show before getting permission from the higher authorities. Sindh govt will take legal action against those violating the law, the notification added.