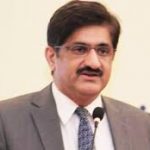 Shah was informed by members of the commission that journalists in various districts especially in Sukkur range were being booked in cases of heinous crimes, including of Anti-Terrorism cases. Shah inquired Sindh Police Inspector General Dr Kaleem Imam about the issue. Inspector General Dr. Kaleem Imam told the members of Commission that he was unaware about the issue and will share the details in the meeting to be held next month.

“Some of members including me raised issue of First Information Reports (FIRs) against journalists in the meeting,” confirmed one of the members of the commission, Hasnain Mirza Member of Provincial Assembly (MPA) of Grand Democratic Alliance (GDA).

Hasnain Mirza added that apparently it seemed that cases were being lodged under the influence of some local powerful persons and most of the cases were being registered in Sukkur division.

Another member of Commission Karamat Ali told The News that that journalists were facing difficulties outside the provincial capital. “But their issues hardly get attention in Karachi,” he maintained.

It is pertinent to mention here that some 50 plus journalists majority of them of Sukkur region were booked under heinous crimes including Anti-terrorism Act, kidnapping of ransom and latter some of cases proved fake in courts.

Journalists blame that some senior Police officers were biased with them due to their reporting of crime especially of smuggling of Iranian oil.