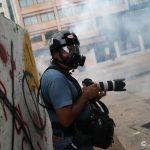 ISLAMABAD – Police in Indian occupied Kashmir (IoK) beat up photojournalists when they were filming anti-India demonstrations in Srinagar.

READ MORE: UK Parliament to elect new Speaker to replace John Bercow on eve of dissolution
According to Kashmir Media Service, at least three photojournalists alleged that they were beaten up by police personnel as they covered stone-pelting in downtown Srinagar in Jammu and Kashmir.

Several other photo and video journalists, including a woman alleged that police personnel chased and verbally abused them.

“Around 4 pm, we reached Khanyar to cover clashes in the area,” Muzamil Mattoo, a freelance photographer, said. “There was minor stone-pelting. We were in between personnel of the J&K police and CRPF (Central Reserve Police Force) near Khanyar Chowk when a policeman pointed his pellet gun towards us and fired.”

He also said that the policemen tried to force him into a police vehicle and arrest him. “A policeman beat me up with a stick. I got bruises on my arm and leg. He also tried to arrest me. He repeatedly asked me why I took pictures of the protest,” he said.

READ MORE: LHC grants bail to Maryam Nawaz in Sugar Mills case
Idrees Abbas, a photojournalist with the Urdu daily, Roshni, who reached the spot after Muzammil, said that he saw the police beat Muzammil up. “I saw two, three policemen surrounding Muzammil and one of them was beating him up,” he said.

Abbas said that he was also assaulted and chased by the policemen when he tried to take pictures of the incident. “A policeman saw me clicking the photos,” he said. “He rushed towards me and hit me with a baton on my back. I crossed the street to save myself but they continued chasing and abusing us.”

Adil Abbas, a freelance photojournalist, said that he was assaulted also.

Masrat Zahra, also in the group of journalists, said that the policemen hurled dirty abuses at her.
READ MORE: Iraqi protesters block vital roads, bridges in Baghdad
Meanwhile, noted Indian author Arundhati Roy has expressed serious concern over the prevailing situation in Indian-occupied Kashmir and stressed the need for Indian intellectuals to speak up.

According to Kashmir Media Service, Arundhati Roy addressing during ‘Mela Ghadri Babeyan Da’ in Jalandhar city of Indian Punjab said that she was ashamed about Kashmir and could not say ‘Mera Bharat Mahaan’.

She said that the silence on Kashmir was deafening. She maintained that while there should have been potent opposition, no one spoke up and very few journalists had spoken about it. She said that Kashmir had been under the densest military occupation for the past 30 years and in August, right after the abrogation of special status of the territory, the biggest searches on Google were ‘getting a Kashmiri girl’ and ‘getting land in Kashmir’ which was disgusting.

READ MORE: IHC suspends presidential notification of ECP member’s appointment
Michaela Kuefner, the Chief Political Editor at Deutsche Welle, Germany’s international TV channel, tweeted that in a modest pre-dinner criticism of the Kashmir clampdown, Angela Merkel said that the situation for the people of occupied Kashmir was unsustainable and not good.

Earlier, talking to German reporters accompanying her, Angela Merkel expressed concern for the people of occupied Kashmir and said that the lockdown of the territory could not be supported for long.