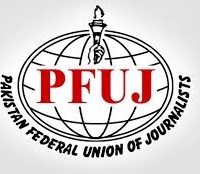 ISLAMABAD: Terming the ban on media to cover funeral of Mumtaz Qadri as violation of Article 19 of the Constitution, the Pakistan Federal Union of Journalists (PFUJ) maintained that the Pakistan Electronic Media Regulatory Authority (Pemra) caused damage to reputation of independent news channels in the country.
Speaking at a meeting, jointly held by the PFUJ, Rawalpindi-Islamabad Union of Journalists (RIUJ) and National Press Club (NPC), PFUJ President Afzal Butt said if Pemra had allowed the media to cover funeral of Mumtaz Qadri, the professional journalists would have done it responsibly without creating any chaos or damaging media credibility.

He demanded of the government to withdraw notices that were served on some news channels or newspapers regarding coverage of Mumtaz Qadri’s funeral, adding, “Our media realises its responsibility, and the government should leave such affairs to the professional journalists who better know what should be made public or not.”
Afzal Butt said if Pemra again tries to impose ban on media to cover any event, the PFUJ would never ever accept it and initiate a movement against this kind of attitude. He said the participants of the funeral of Mumtaz Qadri tortured the media workers to show their anger without keeping it in mind that ban on media was imposed by Pemra, and it had nothing to do with the media organisations.
The participants of the meeting were of the view that the government and Pemra should trust in the abilities of media workers and not impose ban during such kinds of events. The representatives of press clubs and unions of journalists across the country also made telephonic conversation with the participants of the meeting and condemned Pemra for imposing ban on media to cover funeral of Mumtaz Qadri.
The News