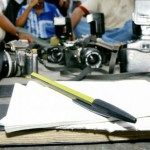 Offices of television channels were attacked and media crews beaten up on 4 March during protest rallies and sit ins in major cities across Pakistan against the execution of Mumtaz Qadri convicted for murder of Punjab Governor Salman Taseer of whom he was police guard. Qadri had shot Taseer multiple times in 2011 because the latter opposed and criticized the blasphemy laws in Pakistan.
‘Aaj News’ television channel’s offices Karachi and Lahore were attacked and the news gathering vans of ‘Aaj News’ and ‘Abb Takk’ TV channel were damaged in stoning. The most violent attack was at Hyderabad Press Club where angry mob six media persons injured and set fire to its computers, equipment and furniture,. A threatening poster on Multan Press Club boundary wall warned media of serious consequences.

The angry protesters forced closure of business centres in Karachi, Hyderabad, Lahore, Peshawar, Rawalpindi and some other cities by resorting to violence and burning tires on roads. Leaders of religious parties addressing participants of protest rallies condemned Mumtaz Qadri’s execution and called it “a move of the government only to appease the West.”

Pakistan’s electronic media on 29 February 2016 gave low coverage to the hanging of Mumtaz Qadri in prison of Islamabad. TV channels after his hanging began to air footage of protesters and two hours later the coverage began to fizzle out although the number of protesters increased manifold. It is believed that television channels were asked by Pakistan Electronic Media Regulatory Authority (PEMRA) not to highlight the hanging or his burial prayers.

Pakistan Broadcasters Association, Pakistan Federal Union of Journalists, Editors for Safety and Council of Pakistan Newspapers Editors strongly reacted and said it was attack on press freedom and asked the government for foolproof security to media outlets, safety of journalists, apprehend the perpetrators of attacks and vowed the government nor protesters could force to have news content according to their whims.