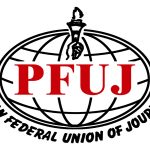 In a joint statement President PFUJ Shahzada Zulfiqar and Secretary General Nasir Zaidi while criticising continued arm twisting tactics against journalists and social media activists, called upon government to immediately withdraw cases against all journalists and social media activists, otherwise there will be a countrywide protest against such a brutal, ill conceived and ill designed act by authorities on fictitious charges.

PFUJ leadership urged Parliament of Pakistan, Supreme Court of Pakistan and international community and international human rights organisations to take urgent notice of worst ever situation and working condition in a country like Pakistan. “We have tackled and countered such conditions and high handedness against media and journalists community in the past and defeated forces of suppression and anti-media and freedom of speech and expression agents, and we are committed to defeat them even today for safeguarding our constitutional rights, they warned.

Minister for Human Rights Shireen Mazari on Friday refuted reports that the Federal Investigation Agency (FIA) had registered cases against journalists and rights activists under the Prevention of Electronic Crimes Act (Peca), 2016.

Taking to Twitter, she said: “This was disturbing news so I checked and my information is that it’s incorrect. A private citizen has sent a complaint to FIA against around 12 journalists. “FIA examines all complaints but no FIR has been registered and FIA can’t register a report under Peca without following the specified legal procedure.”

She urged anyone with “contrary evidence in terms of FIRs” to inform her so that she can follow up. The minister was responding to a tweet by the Human Rights Commission of Pakistan (HRCP) which said it was “alarmed” by reports that cases against “49 journalists and social media activists” had been registered by the FIA under Peca.

“We demand that the state refrain from such action and stop using the FIA to curb political dissent,” the commission said. Amnesty International had also reacted to the news reports, calling upon authorities to withdraw the alleged charges immediately.