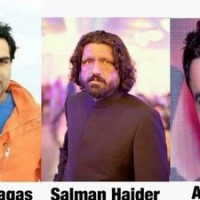 Islamabad  – A fresh petition in blasphemy matter was Tuesday moved in the Islamabad High Court seeking its direction to constitute a judicial commission to determine as to who were responsible to facilitate and escort the alleged five blasphemer bloggers.

The petitioner moved the petition through his counsel Raja Zaheer Hussain and stated that he had filed another petition wherein it had been submitted that the five bloggers namely Salman Haider, Ahmed Waqas Goraya, Asim Saeed, Ahmed Raza Naseer and Samar Abbas were missing and suspected to have been hosting social media pages with inflammatory and blasphemous material against the Holy Prophet Mohammad (PBUH), Sahab-e-Kram, wives of Prophet (Azwaje Mutaharat) and Sacred book of Quran-e-Pak as well as Allah Almighty.

He adopted that the petitioner had filed an application in the federal capital’s I-9 Sector police station for registering a blasphemy case against the missing activists and those others who were liable for the commission of offence under section 295-C PPC, but FIR was not registered against the accused bloggers, but instead after they were recovered, the government institutions escorted them abroad deliberately with mala fide intention.

He alleged that besides them, one introducing his name on Facebook as Tayyab Sardar has been openly posting sacrilegious videos and it has been confirmed that he had left Pakistan in the year 2015.

He contended that it is inconceivable to understand as to why the respondents instead of restraining them to leave the country or taking any action in accordance with law, facilitated them to make arrangements of their exit and escorted them abroad. It is believed that they had been protected by the public functionaries deliberately.

Therefore, he prayed to the court to direct the respondents to investigate with the assistance of NRCCC (FIA), Ministry of IT, PTA and ISI as to who are the actual culprits committing blasphemy and initiate proceedings against them in this regard in accordance with law.

He also requested that it may direct to interpret /define the limits of right to freedom of speech and expression and the press guaranteed under Article 19 of the Constitution of Islamic Republic of Pakistan, 1973.