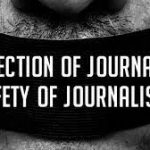 PESHAWAR: Member of the opposition Pakistan People’s Party Nighat Yasmin Orakzai on Monday submitted the Khyber Pakhtunkhwa Protection of Journalists and Media Practitioners Bill, 2021, to the provincial assembly’s secretariat to ‘promote, protect and effectively ensure independence, impartiality, safety and freedom of expression of journalists and other media practitioners’.

The journalist protection bill says the government will take effective steps to ensure that the right of every journalist and media practitioner to life, safety and security as provided under Article 9 of the Constitution is safeguarded.

Also, the government will take steps to ensure that the counter-terrorism or security laws are not utilized arbitrarily to hinder the work of journalists.

According to Section 4 of the bill, every journalist and other media practitioner shall have protection against the disclosure of professional sources of information communication and correspondence.

The bill suggests the establishment of Commission for the Protection of Journalists and Media Practitioners to look into the complaints to be filed with it in respect of acts of harassment, sexual harassment, violence and threat of violence committed against journalists or media practitioners whether by any person, groups of persons or public or private institutions or authority.

It empowers the commission to take suo moto notice of any attack on a journalist or media practitioner.

The proposed law said the employer would be responsible for providing adequate insurance and training to journalists and other media practitioners, who might be at risk of being attacked, injured, or killed due to their work.