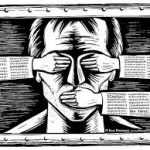 IN an age that requires transparency and leveraging the rapid flow of information, Pakistan appears to be swimming against the tide. Protestations against rising media censorship and growing curbs on the constitutionally mandated freedom of expression have been rising since the PTI government took power more than two years ago.

Today, it is no secret that the media is under constant pressure to desist from saying, writing and showing anything that does not gel with the official version of events. Speaking truth to power, apparently, is considered quaint and unfashionable. The fact is, nothing could be further from the truth. This unfortunate reality was visible in vivid colours during the PDM rally in Karachi on Sunday.

TV channels would dip into speeches by various leaders and then cut back to studios on apparent whim. However, there was clearly more than what met the eye. It was not long before it became obvious that speakers who are known critics of the establishment’s political role got little or no time on air.

Leaders like Mahmood Achakzai, Mohsin Dawar and Akhtar Mengal — who have been consistent in demanding greater rights for their provinces and communities — were either not shown while speaking to the large audience, or parts of their speech were muted. It was clear that news channels were being instructed from somewhere whom to show and whom to black out. This made a mockery of the concept of editorial freedom and reduced the coverage of private news channels to the level of a state broadcaster.

Organizers of the Gujranwala and Karachi jalsas have done well to ensure leaders from all parties get to speak to audiences. This represents a mature and progressive approach to national integration and is the right way to bring more people into our political mainstream. However, by censoring the speeches of its critics, the official machinery is nullifying the inclusive progress towards greater integration.

This is a short-sighted and self-defeating approach that does more harm than good. We should have learnt this by now, having repeated the same mistakes over and over again. Somehow the state finds it hard to reconcile with democratic notions of tolerance and respect for differing points of view within society. Censorship of the kind we are witnessing today reflects the fear and insecurities embedded within the state structure. Such insecurities have fuelled alienation among those who need to be enveloped in a national embrace. We continue to endure the adverse consequences of pursuing such myopic policies.

Censorship has no place in a modern society. If Pakistan has to live up to its Constitution and the values of its founder Quaid-i-Azam Mohammad Ali Jinnah, the state must step back from its coercive approach towards freedom of expression and let people speak their mind. Contrary to official beliefs, this will strengthen, not weaken, the federation.