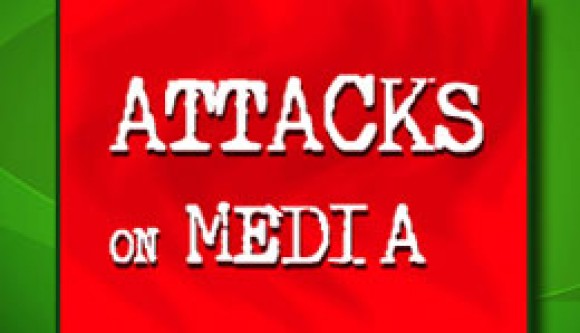 BBC writes: “Three million copies of Wednesday’s edition are being printed. Normally only 60,000 are available each week.

” Prestigious international media houses like the Reuters, Bloomberg and Fox News etc have also reported that up to three million copies of Charlie Hebdo could hit newsstands today. US newspaper “TheWashington Post” has published the latest cover of the French satirical newspaper Charlie Hebdo, despite criticism from conservative Muslims that such depictions were blasphemous and offensive.

The “Washington Post” Executive EditorMartin Baron is said to have approved the controversial publication.

Baron had said lastweek that the paper’s policy was to avoid publication of material that was “deliberately” offensive to religious groups but later said that the new Charlie Hebdo cartoon did not meet that criterion.

Caroline Fourest, a former employee of the satirical French paper Charlie Hebdo had said: “There will be more cartoons. And we all decided, the journalists who did survive and the excolleagues of Charlie Hebdo we all decide together to publish together the new, the next Charlie Hebdo because there is no way even if they kill ten of us, there is noway that the newspaperwon’t be out next week.

” While the Cable News Network (CNN) had decided not to exercise its freedom of expression on the issue of Charlie Hebdo shooting a week ago, various newspapers and television channels in theMuslimcountries like Egypt had demonstrated against the attacks.

Apparently fearing Muslim wrath, CNN’s Editorial Director Richard Griffith had sent an internal memo reading, “We are not at this time showing the Charlie Hebdo cartoons of Prophet that have been considered offensive by many Muslims.

” China’s “Global Times” had argued in its own editorial: “The international community must jointly defend the magazine editors’ rights to personal safety, but this doesn’t mean they side with their controversial cartoons.

” Approximately 60 leading journalists and editors from Egypt’s mainstream newspapers like the “Masr Al-Arabiya” and “Al-Masry Al Youm” etc had staged protests outside Cairo’s Press Syndicate to express solidarity with Charlie Hebdo. On the contrary, some Turkish newspapers had blamed Charlie Hebdo for the shooting incident.

‘Islamic slaughter it suffered’ was the headline of a leading Turkish newspaper “Yeni Akit” had read: “Attack on the magazine that provoked Muslims.” Meanwhile, the headline of another leading Turkish newspaper “The Turkiye Gazetesi” had read: “Attack on the magazine that published ugly cartoons of our Prophet.” The first sentence of an article published by the “Turkiye Gazetesi,” had noted Charlie Hebdo’s long history of publishing unflattering depictions against the Muslim faith. The Iranian government’s official newspaper — named Iran, and which reflects Iranian President Hassan Rohani’s government policies – had offered the most visible coverage, dedicating most of its front page to a large photo of the event, with the headline: “Bloody showof terrorists in Paris. However, another top Iranian newspaper the “Sharq” had slated the French satiricalmagazine for publishing the blasphemous cartoons.

This newspaper had stated: “It is not acceptable that the President of France defends the freedom of speech in his speech after the attacks. This popular journal had published an insulting illustration of the Prophet of Islam.

Before the Charlie Hebdo era (the magazine dates from the late 1960s), France’s most influential anticlerical thinkers trained their fire on Catholicism-for centuries the country’s state religion. As a rule, however, these individuals objected not so much to precise points of religious doctrine as to the fanaticism, ignorance and persecution that, in their view, tended to accompany “true faith.

” The opponents of doctrinaire Catholicism used caricature, irony and humorous blasphemy- thus setting the tone for Charlie Hebdo’s later fight with jihadist Islam.” Israeli top newspaper “The Haaretz”writes in its January 13, 2015 edition: “The big question in the wake of the massacre at Charlie Hebdo is whether the slaughter will bring France out of its corner in the war on Islamist terror.

France has seen some appalling crimes – including attacks against Jews – that could be linked, broadly, to the global war against Islamist terror. But the attack on the satirical weekly takes, by dint of its body count, things to a new level. It’s hard to see howFrance, or any country, will be able to revert to the status quo ante. The magazine has been particularly unbridled in its mocking Islamists from a left-of-center perspective. It stood, courageously in the view of many, for the right of satire in thewake of the publication of the Danish cartoons.

” The headline of an “Al- Jazeera” report had read: “Why Charlie Hebdo attack is not about Islam?” The report’s catch line/shoulder had stated: “Charlie Hebdo massacre is rooted in generations of violence, hypocrisy and greed.

” The “Al-Jazeera” report had furthermaintained: “Twelve people were massacred in Paris on Wednesday merely for expressing their opinion through art. Many might not like the art that prompted the carnage. Theymay consider it obscene and even an attack on their faith. But in the 21st, 15th or 57th century – whatever your religion, calendar, or country – there is no excuse or justification for responding to art with murder.

” The “Al-Jazeera” had gone on to air: “But there is a clear and frightening explanation for this violence, one that demands not merely outrage at the act itself, but at the system that has made it both predictable and inevitable. The problemis that this system is hundreds of years old, implicates most everyone, and has only become more entrenched in the last several decades as the world has become ever more globalised.” Here follow some more reactions:— Dalil Boubakeur, Imamof a Paris Mosque: “This is a thunderous declaration of war. The times have changed. We’re entering a new phase of this confrontation… we are horrified by the brutality and the savagery.

” —A top Indian newspaper “The Hindu” had published: “Charlie Hebdo was brutally attacked for its dark sketches of humour; for apparently talking satire to power. Cartoonists in solidarity with Charlie Hebdo sketched the incongruity of a pencil and a gun. But what explains this incongruity?What is it about satirical humour that can invite such anger or can justify its protection, even through socalled “legitimate” state violence? Novelist Salman Rushdie, a victim/perpetrator of such violence, calls this “art of satire” a “force of liberty against tyranny.” —”The Economist” had viewed: “It seems that satire especially riles those most ripe for it. Those who murder in the name of God, or other high ideals, are monstrous, but also, somehow, ridiculous! In the gap between the true-believer’s moralising self-righteousness and the vicious reality ofwhat he defends there is a fog of delusion. The satirist minds that gap, despises the fog and shines a merciless hot light on the nonsense. The wider the gap, the greater the sustaining delusion, and the more damaging, and dangerous, the satire will be felt to be.”