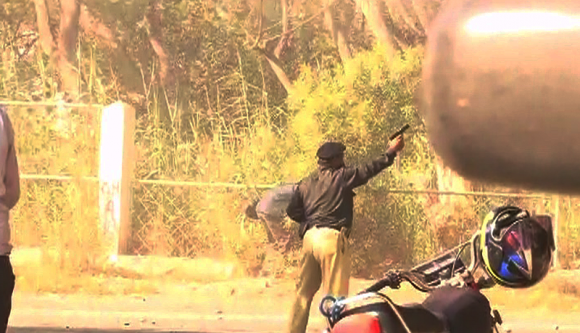 KARACHI: A protest organised by Islami Jamiat Talaba’s Karachi chapter on Friday turned violent when a clash took place between protesters and police. Security forces resorted to aerial firing, tear gas and water cannons to push back the charged mob.

Three party workers, who were affected by tear gas, have been transferred to the nearest hospital.

“The bullet struck his lung, and passed through his chest. He is out of immediate danger and he has spoken to his colleagues,” Doctor Seemi Jamali, a spokeswoman for Karachi’s Jinnah Hospital where Hassan was taken, told AFP.

She added that Hassan was struck by a non-rubber bullet in his back.

Hassan did not appear to have been deliberately targeted but police and witnesses said protesters had been shooting at police and Hassan was caught in the crossfire.

The party denied it was responsible and blamed the police.

Hafiz Bilal Ramzan, head of Islami Jamiat-e-Talaba Karachi blamed police for the “indiscriminate” firing. “Police are responsible for those wounded during the protest including Asif Hasan,” Ramzan said.

Another reporter was also said to be injured in the clashes.