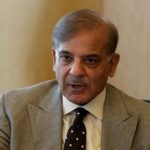 LAHORE: The PML-N President and Leader of the Opposition in National Assembly Shahbaz Sharif on Sunday condemned the arrest and continued detention of Editor-in-Chief of Jang/Geo Group Mir Shakil-ur-Rahman and said his arrest in a baseless case has made fun of Pakistan in the whole world.In his message on World Press Freedom Day, Shahbaz Sharif reiterated the demand of releasing Mir Shakil-ur-Rahman. He paid rich tribute to all media workers, cameramen, anchors working journalists and writers who are sign of truth.

He said that Mir Shakil-ur-Rahman is in jail today while becoming the prisoner of conscience for the freedom of expression. He said that journalists played historic role in Pakistan Movement, adding that media and journalists have played full role in establishment of Pakistan.

Shahbaz said the PML-N will always continue to support the constitutional right of freedom of expression. He said this arrest has faded the whole image of freedom of expression of Pakistan. He said that that until and unless media will be independent, democracy could not be strengthened in the country. He said that when the fourth pillar of the state will be in the handcuffs of censorship then transparency could not come in the society. — Sabah

He said that political parties, civil society and media organizations must unite to work for the freedom of press.