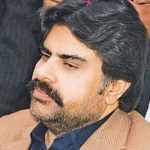 Meanwhile, the world press freedom day was observed here like other parts of the country on Sunday (May 3) in a bid to stand up for freedom of press and journalists around the world.

The members of Hyderabad Union of journalists (HUJ) took out a rally to show solidarity with the fellow media workers who were facing difficulties while discharging their duties all over the world including Pakistan.

Addressing the rally, PFUJ and HUJ office bearers said media workers and journalists had always played an important role in restoration of democracy in the country and still they were playing their part for fundamental rights of the vulnerable section of society. The central leader of Pakistan Federal Union of Journalists Khalid Khokhar, HUJ president Iqbal Mallah and others paid rich tributes to those journalists who had sacrificed their lives for the cause of press freedom.

They called upon the government to provide protection to journalists who were being targeted by influential persons and entities because of their reporting. The participants of the rally also demanded the arrest of murderers of Mehrabpur based journalist Aziz Memon who was strangulated to death some months ago.

SUKKUR: Sukkur Union of Journalist (SUJ) on Sunday observed the Press Freedom Day to raise awareness of the importance of freedom of press and reminded the world of their duty to respect and uphold the right to freedom of expression.

Journalists across the region held rallies outside the Press Club led by PFUJ’s vice president Lala Asad Pathan to express solidarity with journalists across the globe. Rallies/protests also held in Khairpur, Shikarpur, Kashmore, Noshehrofroze, Ghotki and other districts.

Pakistan Tehreek-e-Insaf (PTI) Karachi Division President and Member Sindh Assembly Khurrum Sher Zaman on Sunday said that the present government believed in the complete freedom of press. In a message on the occasion of World Press Freedom Day, he paid tributes to the struggle of journalists. The MPA said that journalists in Pakistan had rendered great sacrifices. The journalism was a sacred and honorable profession. Khurrum said that journalism was an important source of creating awareness among the masses.

The MPA said he saluted the courage and greatness of the brave journalists and the journalists who were martyred in the line of duty would always be remembered.

Khurrum Sher Zaman said that in the current situation of coronavirus, the media workers were also front line soldiers. He said that the journalists along with political parties had made great sacrifices for the restoration of democracy in the country. The present government believed in the freedom of Press. The media had also played vital role in disseminating PTI version from house-to-house,” he said.