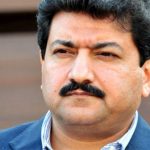 Speaking in Geo News programme Naya Pakistan, Mir said over two dozen people belonging to Firdous’s constituency were recruited in the PID. When the PM learnt about this, he ordered removal of those recruited against rules. Mir rejected Tareen’s contention that he had issues with Azam Khan as he acted as directed by the prime minister. Mir said Firdous’s claim about interference in her ministry was also not right, adding that the PM sacked Yousuf Baig and Iftikhar Durrani was because of her, and now she wanted Shahbaz Gul removed.

Hamid Mir said that if somebody removed by the PM accepts removal, the PM accommodates such a person in some other capacity. Mir cited example of Gul example who after his removal from CM’s office did not criticize the chief minister. Gul was rather promoted when he was moved to the PM’s House. Firdous would not be able to gain any position through attack on Azam Khan or blackmail, Mir added.

Reacting to Mir’s analysis, Firdous in her tweet asked Mir to produce the domicile of those recruited from her constituency. Otherwise, she told Mir, what Maulana Tariq Jameel was saying would have to be accepted.