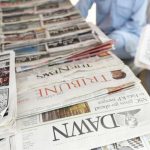 KARACHI: Human Rights Minister Shireen Mazari on Saturday condemned the incidents of “violence and threats” by protesters outside the Dawn offices in Islamabad in recent days.

In a tweet, Ms Mazari said: “Peaceful protest is everyone’s right but giving threats to others cannot be acceptable. I disagree often with @dawn_com’s line but I strongly condemn violence and threats by protesters outside Dawn’s offices.”

“Sadly our society can’t rid itself of Zia’s legacy of intolerance and vitriol,” she added.

PML-N stalwart Khawaja Asif also voiced his support for the publication. “In this hour of trial we stand with Dawn,” he said, prior to attending a consultative session between party leaders in London.

“Dawn is a newspaper founded by the Quaid-i-Azam. Over the last seven decades, they have kept the traditions of our freedom of press and the freedom of expression and [followed] the highest standards of journalism,” he said.

“Any attempt to curb the freedom of expression in Pakistan is one, unconstitutional, and secondly, it negates the basic fundamentals of the creation of Pakistan,” he added.

On Friday, Dawn’s Islamabad bureau was besieged by protesters for a second time this week against the publication of a news report regarding the origin of the London Bridge attacker who stabbed two people to death last week.

Nearly 100 people who had arrived in vans gathered outside the newspaper’s offices and chanted slogans against the media group and set copies of the newspaper on fire. Police arrived at the scene but the protesters dispersed on their own after about 40 minutes.

A mob had first staged a demonstration outside Dawn’s Islamabad offices on Monday. The charged mob, carrying banners and chanting slogans against the newspaper, had remained outside the office building for nearly three hours, besieging the premises and making the staffers hostage.

A day later, dozens of people staged a protest outside the Karachi Press Club against Dawn and made threats against its staffers. They also threatened to besiege the offices of the media group if “prompt action is not taken against the management and outlets of the organisation”.

The siege was condemned by media bodies, journalists, lawmakers and rights groups.

Global media watchdogs — Committee to Protect Journalists (CPJ) and Reporters Without Borders (RSF) — called on the authorities to condemn the besieging of Dawn offices in Islamabad and to prevent demonstrations against the newspaper from turning violent.

“Pakistanis have every right to object to and demonstrate against the Dawn newspaper over its coverage, but threatening violence steps way over the line,” said Kathleen Carroll, CPJ’s board chair, in a statement issued on Tuesday. “We call on Pakistani authorities to take all appropriate measures to ensure the safety of Dawn’s staff.”

The protest outside the newspaper’s Islamabad offices on Monday was condemned by the prime minister’s aide Firdous Ashiq Awan two days later, when she was asked about the siege.