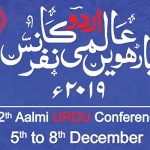 KARACHI: Whatever freedom the media enjoys today in the country was actually snatched by the media. Since independence, around 150 laws were enacted in various regimes to control journalism in Pakistan. Even today there are a total of 44 laws that are used to control the media in the country.

Senior journalist Mazhar Abbas said this as he spoke at a session titled ‘Media: Kitna Qaid Kitna Azad’ (Media: how much in chains and how much independent?) at the Arts Council of Pakistan on the third day of the 12th International Urdu Conference on Saturday.

Abbas said Gen Pervez Musharraf is usually praised for giving independence to the media but it is not mentioned that it was all due to the Kargil war. The journalist was of the view that at the time of the Kargil war, India had many private channels that propagated the Indian stance throughout the world due to which it was said that we lost the media war.

“The level of media freedom which we have right now is the same as the amount of democracy that we have been allowed to enjoy,” he quipped.

The moderator of the session, journalist Wusatullah Khan, started the show with a remark that he had been asked to speak on the issue of media freedom in Pakistan so often in the recent months that the topic now appeared clichéd to him. He asked the panellists if there was a need to discuss the independence of the media in Pakistan because if we compared our country to other countries of the region such as Iran, China, Saudi Arabia and India, it looked like that our media situation was better than them.

Journalist Owais Tohid remarked that comparing Pakistan with only regional countries in this regard was not a good idea as after the digital revolution, the entire dynamics of the flow of information had been revolutionised.

He said that demonisation of a media group starts if it is not liked.

Tohid also expressed concern over the growing self-censorship in the media. Due to this self-censorship, journalism is getting deprived of resistance, he said, adding that journalists have started to believe that by protesting against the state policies against the freedom of expression, they strengthen owners of some media houses who do not pay their salaries on time.

He named state interest, religion and culture as three factors on the pretext of which, the media was curbed.

The moderator asked why it was the case that when protests were organised in favour of Geo News, they were not attended by the workers of other media groups and now when Dawn’s employees are staging protests, they are also alone in the battlefield. Abbas replied to him that media workers are financially weak and majority them did not even have appointment letters due to which they felt vulnerable.

Abbas further lamented that journalists have stopped fighting and all what they are doing to protect their freedom is holding conferences and venting their anger out on other platforms. Two big media groups are the target because if they are subjugated, others will surrender themselves, he remarked.

Journalist Asma Shirazi said earlier the dissenting voices were killed and now they were slandered. She said character-assassination was the strategy being employed since recent years to crush dissent.

She, however, agreed that the Pakistani media was far better than the Indian media because it was still posing questions before the state. “We have people in our ranks who dare to ask questions,” she remarked. She lamented that Indian journalists did not ask their state about what was happening and Kashmir and they pretended that all was fine there.

The moderator said he agreed that it was the state’s right to arrest him for any reason but the state should declare the arrest. Has the state weakened to that extent that it picks me up and then denies doing so, he asked.

Journalist Amir Zia was of the opinion that we have progressed in terms of media freedom. He was of the view that the situation of media in Pakistan is much better than other countries of the region.

He said even in West, there were some taboos and the media was not allowed to discuss them freely. He named holocaust as one such taboo. He also mentioned that the media owners also censored information because of their personal interests.

We can speak what we want anywhere, Zia said.