Home » Featured » The Media in Pakistan 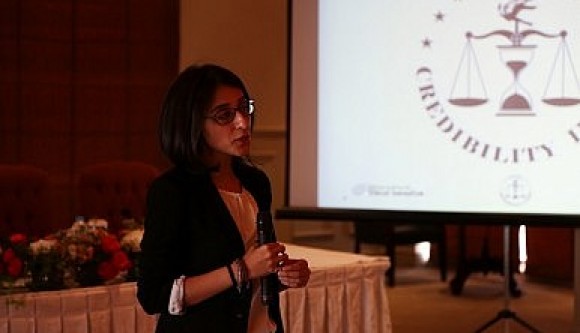 Having been affiliated with the Pakistani media industry for over a decade, Puruesh Chaudhary has become as an integral part of the country’s crop of young and ambitious players in the media sector. From initially working with two leading, local television channels – DAWN and SAMAA TV – Chaudhary has been invited to deliver lectures on the Pakistani media industry at the World Bank, the BBC College of Journalism, Harvard University, the School of International Futures in London, the Global Editors Network in Paris and the Bhutan Media Centre in Thimpu, among others. In 2010 she was nominated by the Center for International Media Ethics as an Ambassador to Pakistan on Media Ethics and two years later, was acknowledged as a Global Shaper by the World Economic Forum.

From 2011-2012, the young media professional has worked in close collaboration with press clubs in Pakistan (in Sindh, Punjab, Azad Kashmir and Khyber Pakhtunkhwa), initiating comprehensive Investigative Journalism and Media Ethics courses for journalists across the board. Currently the director of Mishal Pakistan (a social enterprise) and the founder of non-profit Agahi, under which she launched the Agahi Awards, Pakistan’s first annual journalism awards, Chaudhary is presently also serving as a member of the World Futures Society as a contributing reviewer on the millennium project which unites futurists the world over to improve global foresight.

In an interview with The Diplomat, Chaudhary speaks about the downside of Pakistan’s media industry, media ethics and the state of investigative journalism in the country.

You have more than a decade’s experience as a media professional in Pakistan. From your perspective, has the Pakistani media industry evolved?

Yes it has evolved. However it still has a lot of growing up to do. Recent trends indicate that consumption patterns have switched from linear to non-linear media, where much of the responsibility and the onus of public opinion principally come from the broadcast medium – be it television or radio. But then the question arises: are these information outlets doing a promising job? Unfortunately the struggle is still there. I believe the media can play a progressive role in nation-building, especially when it comes to a nation as young as ours. It can enable governments, corporations and other non-state actors such as the civil society and academia to create an environment that can assist in bridging gaps within the existing socio-economic and political structures.

Do you think a free and fair media exists in Pakistan today?

The media in Pakistan is free, whether or not it is fair, that’s an entirely different debate altogether. How many developing nations does one comes across that gets to see news coverage vehemently criticizing the government, the armed forces, the intelligence agency, the judiciary, etc? In Pakistan, these institutions are not only ridiculed but are also disgraced. Now, is that fair? I suppose not, because not enough research and competence goes into planning content. One can easily judge this by the sheer absence of quality programming one gets to see on a day-to-day basis.

What are our drawbacks?

The industry has yet to become professionally competitive. Our media lacks integration into a broader policy agenda on governance and public sector reform. The role of the media in a country clearly situates it as an actor on the political stage. The media cannot fulfill their democratic roles if they are not embedded in an enabling regulatory environment and a culture of transparency.

As of now the industry benchmarks its performance essentially based on two factors; sensationalism and who breaks the news fastest, neither of which qualifies as credible or even educational. The industry is missing performance-based mechanisms, indicators that observe the credibility and rationality of the content being delivered. These gaps are then exploited by either an extremely incompetent workforce or by other vested interests. The lack of industry-academia linkages is another issue – a common understanding on the relationship is that the collaboration between the two will not only produce quality research but would also contribute towards new information and knowledge building of the collective wisdom of the society. A corporate governance structure that safeguards the interests of various stakeholders in the information ecosystem is missing from within the media industry, which is leading to malpractice and exploitation.

Do you think we have solid investigative journalism being carried out on a local level?

It is well established that local and national journalists are prone to unhelpful sensationalism or single, unsubstantiated narrative. This often is a result of a lack of investment in investigative reporting. Public and institutional awareness of the benefits of investigative journalism creates indigenous demand for quality reporting and accountability of public representatives. Having said that, advertising revenues for both electronic and print are declining; unfortunately this has had a significant impact on human capital development. The Pakistani media industry lacks the capacity to understand and appreciate data, a key factor for quality investigative journalism. The amount of data available in Pakistan has not been properly exploited to create worthy investigative journalism pieces on governance, social injustice, and economic mismanagement.

Please comment on the lack of security provided by the state and media houses for journalists. How many more assassination attempts, murders and threats is it going to take for them to start taking security for media professionals seriously?

“I say protect the innocent. Protect those journalists who are doing their duty and who are serving both the public and the government by criticizing the government freely, independently, honestly which is an education for any government.” – Muhammad Ali Jinnah on the condition of the Press in India in the Imperial Legislative Council, September 19, 1918.

Need I say more? Pakistan is the world’s most dangerous country for the press. More than 90 journalists have been killed since 1947. These figures tell many stories, not all of course related to the buzz around “freedom of press.” Much of it has to do with training, competence, and capacity to operate in volatile areas and destabilizing conditions. Life before any story – a journalist can remain committed to his/her profession if he/she is committed to surviving.

Media organizations in Pakistan, just like elsewhere around the world, are owned by corporate, political and media persons. Different stakeholders in the industry exist to mold the public opinion for their own interests, [at the cost of] the ignorance of [ordinary people], exploiting their basic right to information. The thin line between rating vs. credibility is gradually disappearing. There’s no denying the efforts that have been made to revisit ethical codes of journalism and codes of conducts for journalists have been reframed nationally and internationally. But even [now], an institutionalized mechanism that sets benchmarks and demands quality journalism is still being overlooked and deliberately ignored.

What’s next for Agahi? How does it intend to aid in the evolution of investigative journalism in Pakistan?

Agahi intends to continue training journalists on emerging tools and technology for investigative reporting. Analysis of and synthesizing “big data” is something that is essentially required, since our audiences are no longer confined to traditional boundaries. Agahi will be focusing on data-driven journalism and hopefully, this will improve the quality of investigative reporting in Pakistan.

Sonya Rehman is a journalist based in Lahore, Pakistan. She can be reached at: sonjarehman [at] gmail.com