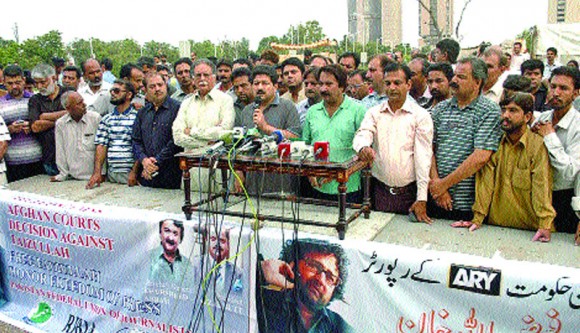 ISLAMABAD: Mediapersons and politicians on Wednesday expressed their resolve to use all influence with the Afghan authorities to ensure the release of Pakistani journalists Faizullah Khan.

Last week, the Karachi based reporter was convicted by a Jalalabad court to serve a four year jail on charges of spying as he entered the country without legal permission.

Speaking at the protest demonstration organised by Pakistan Federal Union of Journalists (PFUJ- Afzal Butt group) at the National Press Club, Information Minister Senator Pervaiz Rasheed said that the government had directed the foreign office to provide all possible support to Faizullah.

The protests were held outside the press clubs of all the major cites.

“We respect judiciary and the decision must have been taken after thorough consideration but we would like the Afghan government to look into the matter on humanitarian grounds and resolve the matter at the earliest,” the information minister added.

Senior journalist says Afghan govt has pardoned Faizullah, will release him soon
The chairman of Senate Standing Committee on Interior, Senator Talah Mehmood, said the Pakistan, Afghanistan border had not been clearly demarcated, therefore anybody could go astray.

“Faizullah might have crossed the border unintentionally but putting him behind bars for four years for this crime is too harsh,” Senator Talah said. The senator said Afghan government should also stop all its citizens from crossing into Pakistan illegally.

Other speakers including Afzal Butt, the president of his own faction of PFUJ said Faizullah went to Afghanistan to do a story on Taliban and North Waziristan, two months back.

“Initially, there were reports that he was missing and could have been kidnapped, but later Kabul communicated to the Pakistani authorities that they had arrested him on May 6, 2014 as he entered into Afghanistan without proper document,” Mr Butt added.

He demanded the government that efforts should be made for his release before Eid.

However, Salim Safi, anchorperson announced that the Afghan ambassador in Islamabad had assured him that Faizullah would be released before Eid, as the president Karzai has pardoned his punishment.

The protest was also attended by anchorperson Hamid Mir, who after recovering from the deadly attack, was able to walk and received a warm welcome from fellow journalists and politicians.