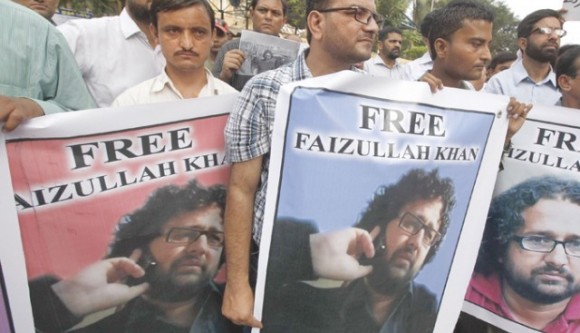 KARACHI: The Sindh High Court (SHC) on Tuesday ordered the standing counsel to submit all the relevant documents, including an appeal filed in a high court in Afghanistan, against the conviction of Pakistani journalist Faizullah Khan.

Sania Faizullah, wife of the Karachi-based journalist, had filed an application with the court about her husband, who had gone missing from the tribal areas on April 22.

A two-member bench, comprising Justice Muhammad Ali Mazhar and Justice Shahnawaz Tariq, called for the documents by July 22. Sania said her husband, working with a private-run television channel, went to the tribal areas on assignment, but did not return.

Sania said the TV channel’s administration told her that her husband had been detained by Afghan intelligence agencies. She pleaded with the court to order the federal government make all efforts for his return.

The standing counsel Saeed Memon said Faizullah has been convicted in Afghanistan. The counsel said that according to his information the federal government had filed an appeal in the Nangarhar High Court against the conviction.

The bench acquiesced and adjourned the hearing till July 22.