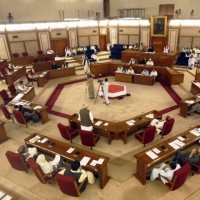 QUETTA: Journalists staged a walkout from Balochistan Assembly’s proceedings on Saturday to register their protest against the targeted killings of Express News employees.

A technician, driver and a guard were shot dead when the channel’s stationary DSNG van was ambushed in Karachi on Friday.

Journalists raised slogans against the killings, terming it an attack on the freedom of expression and speech. After their walkout, the media representatives staged a demonstration outside the assembly hall and demanded that action be taken against the killers.

“It is a complete failure on the part of the law-enforcement agencies as media persons are now being easily targeted in public places,” said Irfan Saeed, the Balochistan Union of Journalists (BUJ) president.

Meanwhile, opposition leader Maulana Abdul Wasay of the Jamiat Ulema-e-Islam-Fazl (JUI-F), provincial ministers Sarfraz Bugti, Hamid Achakzai, Nawab Shahwani and Shaikh Jaffar Mandokhail came out from the assembly session and promised journalists that they would table a resolution against the murder of Express News staffers.

“Our hearts go out to the grieving families and the government of Balochistan stands by with the media,” said Maulana Wasay.

Chief Minister Dr Abdul Malik Baloch announced that his government will form a judicial commission to investigate the killings of journalists across the province.

About the targeted killings of Express News employees, he announced during the assembly session on Saturday. “I express full solidarity with the grieving families who have lost their loved ones in the attack on the Express News DSNG van,” he told the house.

The chief minister said that as many as 30 journalists have been killed in Balochistan so far in different incidents of targeted killings and bombings. “My government will soon launch a judicial inquiry into these killings,” he said. “We will discuss this issue with other members of Balochistan Assembly and seek their suggestions on tabling a joint resolution,” he told journalists.