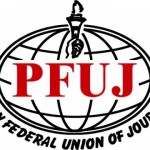 SUKKUR: Journalists from Sukkur and Larkana division protested in front of the Central Prison Shikarpur on Saturday where the hearing in the Wali Khan Babar murder case was in progress by an ATC judge.

Hundreds of journalists from Sukkur and Larkana rallied under the banner of the Pakistan Federal Union of Journalists in front of the Central Prison Shikarpur, where the ATC judge was hearing the Wali Khan Babar murder case.

The ATC judge adjourned the case till January 25 owing to the non-appearance of the counsel of the under-trail prisoner.

Police and Rangers had cordoned off the Central Prison Shikarpur.

On the occasion, executive member of the Pakistan Federal Union of Journalist Lala Asad Pathan said that journalists were being assassinated by terrorists but the government did not take any action.

He pointed out that 112 journalists had sacrificed their lives in the line of duty. He said that speedy justice and speedy trail were needed in the Wali Babar case.

Pathan said journalists were determined to spread their protests and rallies across the country.

Deputy Commissioner Shikarpur Aziz Ahmed met journalists and assured them of conveying their message to the ATC judge.

Later, journalists blocked the Indus Highway, Shikarpur, against the attack on a private television channel which claimed three lives. They demanded arrest of the killers.