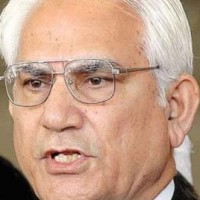 General Ziaul Haq once threatened if he hanged a few journalists, no one would dare speak against him. He did in fact get three journalists — Khawar Naim Hashmi, Iqbal Jaffery and Nasir Zaidi — flogged. The fourth one was spared on doctor’s advice because he was physically disabled.

A few days ago, Ahmad Raza Kasuri, senior counsel for another military dictator General (retd) Pervez Musharraf, used a similar tone and warned journalists not to speak against the “commando.”

When Gen Zia used such a threatening tone in a media briefing, Nisar Usmani, a towering journalist, stood up and said: “General, life and death is in the hands of Allah. Yes, you can put us in prison, but you can’t scare us with such threats.”

Journalists survived and journalism flourished but dictators have gone with the wind. Zia would always be remembered for his dark era and journalists for their glorious struggle in which our colleagues even gave away their lives but the mission for the freedom of the press continued.

Mr Kasuri’s love for dictators needs no introduction. He was on Zia’s side and got Bhutto hanged. Today, he is on the side of yet another military dictator, Pervez Musharraf. He is also a leader of Musharraf’s party, the All Pakistan Muslim League (APML). He remained quite loyal to him and one must admire him for his love and affection for dictatorship. But now he has even adopted some of the habits of dictators, too.

This is what he said about journalists outside the courtroom while talking to the media.

Forgive me if I had misquoted the senior counsel for Mr Musharraf.

It could be possible that the journalist’s question was a bit provocative, but this is what journalism is all about. He succeeded in getting the senior counsel to lose his temper. But Mr Kasuri did not merely lose his temper, he levelled very serious allegations and also threatened journalists, particularly those speaking and writing against the “commando.” So what if tomorrow something happens to the journalist who made Musharraf’s counsel nervous? Is this statement of Mr Kasuri an FIR against him? He had alleged that such journalists are on someone’s payroll. Now, I am not sure whether or not the said journalist would file any complaint against him, but I would certainly like Musharraf’s lawyer to provide evidence. If not, the PFUJ and RIUJ should file a case against Mr Kasuri.

He did not stop there and accused the journalist of being an Indian agent and also challenged his Pakistani nationality. “You look like an Indian journalist.”

Mr Musharraf’s love for the Indian media is quite known. He had even sacrificed the Agra Summit in his famous “media talk” with the Indian editors and senior journalists.

Last month, Musharraf gave interviews to selected anchors and foreign journalists based in Pakistan. I respect his right to be selective but I cannot give the right to anyone to challenge my nationality. Some journalists may have dual nationality but who knows how many retired, if not serving, have more than one nationality? So let some commission a probe on this as well. So, Mr Kasuri, prove it, who among Pakistani journalists are Indians?

About a week back another counsel for Musharraf, Barrister Saif, declared me “Nawaz Sharif’s self-proclaimed spokesman” in a TV talk show when I only expressed my view on Mr Shareefuddin Pirzada’s love for the Law of Necessity and how he had defended military dictators in the past. I replied, “Deny it if I am wrong; but don’t pass such remarks. I am not like you, who changes his loyalties. I am simply a journalist and my association is with journalism.”

January has often been bad for journalists. A few years back in this month, we had lost Wali Khan Babar and Daniel Pearl. But January 2014 is the bloodiest of all years. One journalist and three media staff members have already been killed in Sindh alone. One journalist was seriously injured in the vicinity of the Khyber Pakhtunkhwa Assembly.

Now who knows what Mr Kasuri and his team is up to and how they will “fix” journalists. So my advice to him is to either hold his tongue or do whatever he or his team members like to do. We are accountable to our viewers and readers, as freedom of the press is for the people’s right to know.

To our journalist colleagues, I can only say, “Continue your work with responsibility. Ask tough questions but keep your cool. Maintain objectivity in your reporting and express yourself in your articles and columns but that too with decency. At least this is what great editors and journalists have taught us.