Home » Featured » Journalists under siege from threats, violence and killings 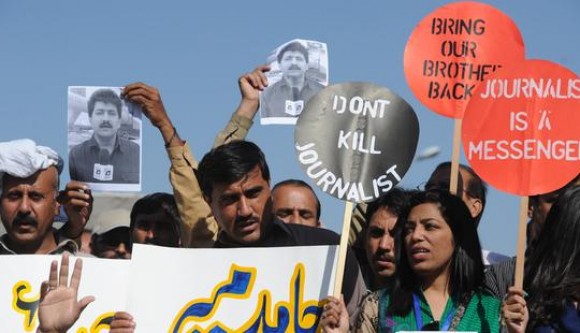 Journalists in Pakistan live under the constant threat of killings, harassment and other violence from all sides, including intelligence services, political parties and armed groups like the Taliban, Amnesty International said in a new report today.

‘A bullet has been chosen for you’: Attacks on journalists in Pakistan, describes how the Pakistani authorities have almost completely failed to stem human rights abuses against media workers or to bring those responsible to account.

Amnesty International has documented 34 cases of journalists being killed in Pakistan in response to their work since the restoration of democratic rule in 2008, but only in one case have the perpetrators been brought to justice.

But these killings are just the most brutal statistic – many more journalists have been threatened, harassed, abducted, tortured or escaped assassination attempts in the same period.

“Pakistan’s media community is effectively under siege. Journalists, in particular those covering national security issues or human rights, are targeted from all sides in a disturbing pattern of abuses carried out to silence their reporting,” said David Griffiths, Amnesty International’s Deputy Asia-Pacific Director.
“The constant threat puts journalists in an impossible position, where virtually any sensitive story leaves them at risk of violence from one side or another.”

The report is based on extensive field research into over 70 cases and interviews with over 100 media workers in Pakistan. It examines several recent cases where journalists have been targeted for their reporting by a range of actors.

Numerous journalists interviewed by Amnesty International complained of harassment or attacks by individuals they claimed were connected to the feared military spy agency, the Directorate for Inter-Services Intelligence (ISI). While some are featured in the report with names changed, others could not be included even under a false name because they feared for their lives.

The spy agency has been implicated in several abductions, torture and killings of journalists, but no serving ISI officials has ever been held to account – allowing it to effectively operate beyond the reach of the law. Human rights violations against journalists by the ISI often follow a familiar pattern that starts with threatening phone calls and escalates into abductions, torture and other ill-treatment, and in some cases killings.

In conflict-ridden regions in the northwest and Balochistan province, the Taliban, Lashkar-e-Jhangvi and ethnic Baloch armed groups openly threaten reporters with death and attack them in retaliation for seeking to highlight their abuses or not promoting their ideology. Journalists in Pakistan’s heartland of the Punjab have also faced threats from the Taliban and Lashkar-e-Jhangvi-linked groups.

Despite the wave of violence and attacks, the Pakistani authorities have largely failed to hold perpetrators to account. In the overwhelming number of cases researched by Amnesty International, authorities rarely adequately investigated threats or attacks or brought those responsible to justice.
Only in a handful of high-profile cases have more thorough investigations been carried out, and only after public outrage has made it impossible for authorities not to act.

“The government has promised to improve the dire situation for journalists, including by establishing a public prosecutor tasked with investigating attacks against journalists. But few concrete steps have been taken,” said David Griffiths.

“A critical step will be for Pakistan to investigate its own military and intelligence agencies and ensure that those responsible for human rights violations against journalists are brought to justice. This will send a powerful signal to those who target journalists that they no longer have free reign.”

Media enterprises operating in Pakistan must also ensure they provide adequate training, support and assistance to journalists, in an important, practical step towards addressing the risk of abuses while they are at work.

“Without these urgent steps, Pakistan’s media could be intimidated into silence. The climate of fear has already had a chilling effect on freedom of expression and the broader struggle to expose human rights abuses across Pakistan,” said David Griffiths.